In this district, showcase of Parisian monuments, historic buildings are each more sumptuous than the last. They will transport you into the history of Paris and France from the 18th to the 20th century, beginning with museums and their major collections and finishing in triumph with the Iron Lady, the Eiffel Tower.

The Eiffel Tower and the surrounding area

Symbol of Paris and France, the structure called The Iron Lady is named after its designer and architect Gustave Eiffel. Built in 1887 as the flagship of the World’s Fair of 1889, its destiny was to be temporary, but 120 years later, it still dominates Paris and is the global symbol of Parisian romance. Visitors from around the world come to be photographed during day and especially at night, when the tower shines with 1,000 sparkling lights.

Its completion was an unusual technical challenge, erected in just over two years, and represents the pinnacle of metal architecture of the industrial era. Endless source of inspiration for artists, it remains the most visited paid monument in the world. The bust of Gustave Eiffel, sculpted by Bourdelle in 1929, is located at the foot of the north pier. 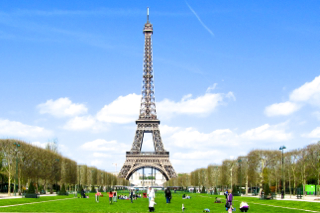 A certified ‘‘Tourism and Handicap’’ location. Second landing is accessible for people with reduced mobility. For people with a hearing impairment, magnetic loop amplifiers are available at the ticket counter.

The Eiffel Tower by the numbers 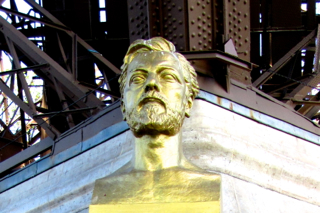 Gustave Eiffel was born in 1832 in Dijon. Engineer by vocation, Eiffel founded a company specializing in structural steel in 1864. The Tower would be his crowning achievement, marking the culmination of his career and revealing his creative genius. However, Gustave Eiffel left his mark on other prominent and spectacular structures around the world, among them the metal structure of the Statue of Liberty in New York, the Porto Viaduct in Portugal, the Pest train station in Hungary or the dome of the Nice Observatory. He devoted the last years of his life to experimental research activities before dying in 1923.

Two options are available for visiting the monument. It is possible to climb the 704 steps up to the second landing, which allows for a closer look at the metal structure. If you’re not feeling up to the challenge, elevators are available to transport you to the different landings.
On each landing there are many dining options: from snacks to the gourmet restaurant "Le Jules Verne" (see  box "Sleeping / Eating”).

Family
To learn about the history and the mysteries of the Eiffel Tower in a playful way, follow Gus, the tower mascot, along an educational tour full of inquiries and questions for children 6 to10 years old. Activity and guidebook available at Cineiffel on the 1st landing or you can download it on the Eiffel Tower Website. 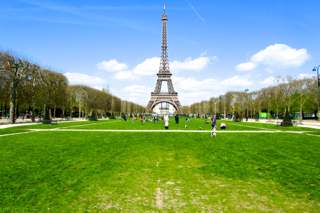 The Champ de Mars, named after the Roman god of war, was installed in 1780, and evokes the military function of the plaza that once served as an exercise field for the cadets of the Military Academy. The park is decorated with lakes and ponds, and many birds have since taken up residence (including the tawny owl). Visitors will also appreciate the beautiful view of the Eiffel Tower. 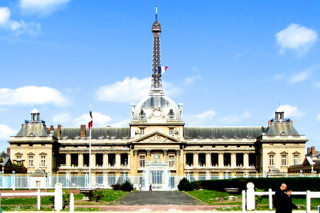 Louis XV founded the institution in 1748 in this imposing building. The school shaped the future officers of the royal army, including a certain Napoleon Bonaparte. Since its creation to today, its function has remained the same.

In the surrounding area 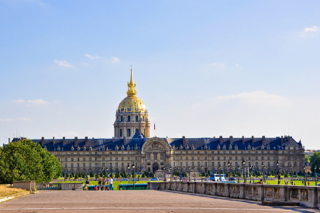 Between the Pont Alexander III and the Hôtel des Invalides, this promenade surrounded by lime trees offers magnificent views of some of the most beautiful monuments of Paris. It was conceived in the early 17th century to serve as a garden for disabled veterans who were nearby residents. 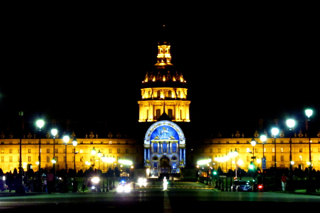 The construction of the Hotel des Invalides was in response to a request by Louis XIV, who wanted a place dedicated to disabled veterans and retired military members, a first in Europe. Consisting of a hospital, barracks, a church and supplemented by the Dome Church in 1706, it could hold up to 4,000 residents at the time.

A single ticket allows access to the Army Museum, the Church of the Dome (tomb of Napoleon I), the Museum of Relief Maps and the Museum of the Order of the Liberation.

Open daily.
April through September : 10 a.m. to  6 p.m. ;
October through March : 10 a.m. to 5 p.m.
Lecture tours available.
Many activities for children. Model workshops and discovery tours are offered during holidays for children 8 years old and up. Information and reservations, tel : 01 45 51 92 45. Price: €7 per child.

The Museum of Relief Maps presents a unique collection: historical models of fortified towns and the surrounding countryside, carried out between the reigns of Louis XIV and Napoleon III, from the 17th to the 19th century. Their function was primarily a strategic and informative one, just as today one would look at a map. The biggest battles are well presented. Through the different maps, visitors can view and understand the history of Paris and its urbanization over the centuries.
Each of the 28 models presented demonstrates a surprising realism and a meticulous attention to detail. They are indeed unique universal masterpieces. 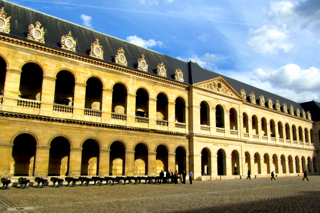 A single ticket allows access to the Army Museum, the Church of the Dome (tomb of Napoleon I), the Charles de Gaulle Historic Museum (closed on Mondays), the Museum of Relief Maps and the Museum of the Order of the Liberation.

It was quite natural that the Army Museum was installed in this prestigious building in 1905. The museum traces the military history of France, from antiquity to World War II. 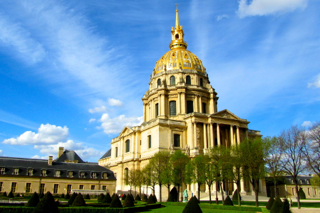 A single ticket allows access to the Army Museum, the Church of the Dome (tomb of Napoleon I), the Charles de Gaulle Historic Museum (closed on Mondays), the Museum of Relief Maps and the Museum of the Order of the Liberation.

Conceived by the greatest architects of the Palace, the Dome Church is a masterpiece of French classical architecture. For many, this is the most beautiful dome ever built in France.
On the exterior, in Doric and Corinthian styles, one can see the statues of Charlemagne and Saint Louis. Above them are represented Strength, Justice, Temperance and Prudence. Inside, the large mural painted in the dome represents Saint Louis handing his sword to Christ. A military mausoleum, it houses the tombs of military leaders, notably Napoleon Bonaparte (Napoleon I).

The Church of Saint-Louis of the Invalides houses the Tomb of Governors, where military leaders were laid to rest. Visitors will notice that here the vault is decorated with military trophies. The organ dates back to 1687.

Other museums in the 7th District 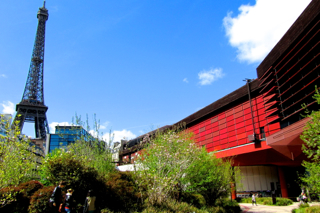 Opened in 2006, the building was designed by Jean Nouvel, its bridge-shaped metal structure recalling the Eiffel Tower. From an architectural point of view, the beautiful 800 m² green wall, which faces the Seine is also impressive. Designed by Patrick Blanc and by the landscape architect Gilles Clément, this garden haven is perfect for taking a break from a museum visit.

The museum is dedicated to the arts and civilizations of Africa, Asia, Oceania and the Americas (Central and South). There are around 3,500 objects on display (merely one percent of the total collection!), and the exhibits are regularly renewed. Exceptionally rich, the museum’s collections are supplemented by thematic areas addressing different cultural heritages or existential questions raised by different civilizations.

The Quai Branly Museum opens its doors to the world and its cultures, so different and so rich, calling for reflection and an understanding for one another. The museum also hosts major international exhibitions. 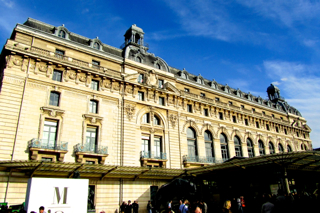 This museum is housed in the beautiful Orsay train station, built in 1898 to accommodate visitors to the World’s Fair of 1900. Its collections include paintings and Western sculpture from 1848 to 1942. Its internationally renowned collection of Impressionist and Post-Impressionist paintings is the largest in the world. But more than the quantity is the quality of the masterpieces presented, which make it a must-see: "The Luncheon on the Grass" by Edouard Manet or "The Origin of the World" by Gustave Courbet, and many others. Other forms of artistic expression from this period are also presented (architecture, decorative arts, photography). 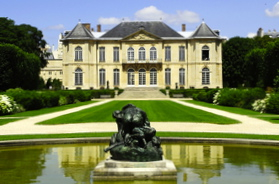 Rodin, arguably the greatest sculptor of the 19th century, settled in this beautiful 18th-century mansion in 1908, which became a museum two years after his death, in 1917. Sculptures and drawings by the master are supplemented by paintings by his friends (Monet, Van Gogh, etc.). The peaceful park surrounding the museum is suitable for a quiet stroll. 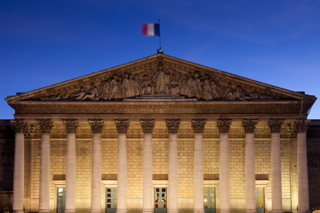 The Palais Bourbon, a place of parliamentary life, has welcomed the National Assembly in its various forms since 1798. Italian in style, its name comes from the Duchess of Bourbon who owned the land on which the monument was built. After the death of the Duchess, vast expansion work was carried out: the courtyard was surrounded by buildings and extended west to the Hôtel Lassay. The façade consists of 12 columns, and was completed in 1810.
Guided visits only.