Along with the Alyscamps, the city had five cemeteries. Two of them, the Alyscamps and Trinquetaille owed their fame from the late 4th century onward to the martyrdom of Genest, an Arlesian saint.

As the reputation of the place became more and more prestigious, many people wanted to be buried there, in particular the bishops of Arles. Saint Honorat was the bishop of Arles between 426 and 429, whose name was given to the church at its reconstruction in the 12th century. At that time, the cemetery had also become the starting point in Arles of the Pilgrimage Route of  Saint Jacques de Compostela. This tradition of burial at the Alyscamps would continue until medieval times. 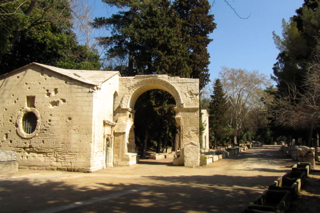 During Antiquity, the world of the dead was separated from the world of the living, and so the cemeteries were outside the city walls as burials were forbidden inside. Under the influence, among others, of Christianity in the first centuries AD, the habit of burying the bodies in coffins or sarcophagi gradually replaced incineration, which disappeared during the 3rd century.

The cemetery exudes a mysterious atmosphere imbued with a certain charm. A path runs along the sarcophagi, then widens to a driveway, leading to the remains of the early Christian necropolis outside the church of the Saint-Honorat abbey. In the Middle Ages, this site included many vaults (nearly a thousand), chapels and mortuary monuments. The few vestiges that remain of these constructions are kept at the Museum of Ancient Arles. The most beautiful pieces and sculptures were looted, or offered by local lords to their visitors. 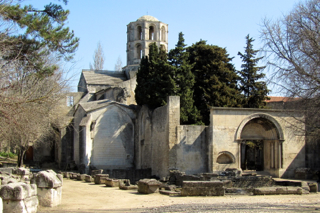 The history of the Church of Saint-Honorat is still not fully known. Most of the church that is still visible today was built in the 12th century, at which time the building was abandoned for lack of funds. The church was supposed to feature a nave with aisles of five bays; only one, to the east, was built. The cross is covered with a dome surmounted by a beautiful octagonal tower, whose two floors are complimented by antique Roman-inspired décor.