The amphitheater is the most important and best-preserved Roman monument of the ancient Roman colony. Its architecture is fully designed in relation to its role as a place for grand entertainment, hosting a large audience. 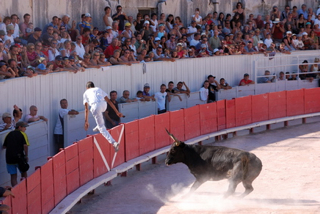 With a length of 136 meters and a width of 107 meters, the elliptical amphitheater of Arles is slightly larger than that of Nîmes. The facade has two levels featuring sixty arcades. The cavea, space reserved for spectators, included 34 steps, divided into four parts where spectators were placed according to their social rank. Gladiators and animals waited to enter the arena, facing the crowd in the basement, under a covered hatch in the floor. The stands could hold about 21,000 spectators, whose movement was carefully organized by a network of gates, galleries and staircases.

During the Middle Ages the amphiteater’s defense system was strengthened by four towers, three of which are still visible today. They offer a nice view of the rooftops of the city. The interior and exterior of the amphitheater then became a real town, complete with streets, squares and churches. Two churches and 212 houses were located there. It wasn’t until the 19th century that the houses were destroyed and that the restoration of the Roman site begun. The amphitheater regained its original function, particularly with bullfighting, and is often called “the Arena.”