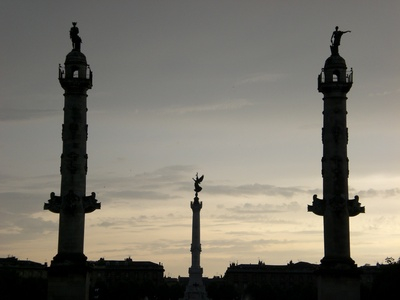 The esplanade and the place des Quinconces

It is the largest square in Europe, covering 12 hectares. The Esplanade was built on the ruins of the Trompette Castle, slowly sloping toward the Garonne. This vast fortress, built in the 15th century, was part of a military and defensive architectural ensemble built by Charles VII during France’s recovery of Bordeaux to assert the supremacy of the Kingdom on its subjects.

Work on the Esplanade lasted 10 years, and it was completed in 1828. Trees planted in quincunxes make up the walkways and link the banks of the Garonne to the Monument aux Girondins by a wide path. In honor of the victorious maritime campaigns, two 21-meter Neoclassical rostral columns face the river and mark the entrance to the square. The decoration at the base recalls the supremacy of ancient Rome on the seas. Visitors will also note white marble statues of Montaigne (Mayor of Bordeaux) and Montesquieu (Member of Parliament) that date back to 1858.

A carnival is held here in March and October.

The Monument aux Girondins, in memory of the political activists that share its name, was erected merely a century after the demise of this political movement to celebrate the victims of the Terror (during the Revolution) and the Republic. After 15 years of work in 1902, the column rose 54 meters above Bordeaux, topped by a statue of Liberty breaking her chains. It is the work of sculptors Dumilâtre and Rich. At its base the statues represent the city of Bordeaux, the Garonne River and the Dordogne River. The bronze fountains symbolize the Triumph of the Concorde and the Republic, whose chariots are pulled by sea horses. On the side of the Grand Théâtre, the figures represent Vice, Ignorance and Falsehood.

Behind the monument visitors will notice the architectural unity of buildings arranged in a semicircle. The rest of the buildings around the square were built in a classical style for the sake of artistic coherence.

Who were the Girondins ?
"La Gironde" was the name given to the political movement begun by a group of activists during the French Revolution, a group in favor of the establishment of a Republic in France. The movement chose this name because of the involvement of several members of government from the Bordeaux region. The Girondins party held a majority in the Legislative Assembly and the National Convention ; the opposition was made up of Montagnards. Both parties clashed violently and the movement ended in blood, with many of its activists executed in 1793.

The Intendent Tourny was at the origin of these tree-lined walkways. To the north, the walkways begin at the square of the same name where the statue of Tourny stands. From both sides rise 18th and 19th century building façades.

This former Dominican chapel unveils a richly decorated Baroque façade on the Place du Chapelet. The interior, more sober, has remarkable acoustics. The beautiful organ case dates back to the 18th century. The church hosts many concerts. Guided tours are available.

Built on the orders of the Duke of Richelieu, Governor of Guyenne, by Victor Louis between 1773 and 1780, the building was one of the jewels of Gothic architecture in the city. It now houses the Opéra National de Bordeaux, one of the most beautiful theaters in France.

Its exterior is decorated with twelve Corinthian columns topped by statues of the nine muses and three goddesses (Juno, Venus and Minerva), and it’s up to visitors to recognize them! Visitors will note the monumental staircase, the coffered ceiling of the hallway and the ceiling of the magnificent concert hall, which showcase large-scale paintings. Tours of the interior are available through the Tourist Office, or by attending a performance.