This monument is included on the World Heritage List under the Pilgrimage Route of Santiago de Compostela (1998).
Built between the 11th and 16th centuries, the cathedral was consecrated in 1096 by Pope Urban II, who came to preach there during the First Crusade. It offers a fine example of Gothic architecture.

Many royal weddings have been celebrated in the cathedral, including that of Eleanor of Aquitaine to Louis VII, son of the King of France, in 1137. During the following century, the cathedral was damaged several times by storms and fire. Only the magnificent Portail Royal (1250), protected by the townhouses against the wall, escaped destruction. In the 19th century, after serving as fodder reserve during the Revolution, the renovation led by architect Abadie formed a coherent architectural ensemble.

The nave dates back to the 12th century, while the choir and chapels are from the 14th century. It was completed in the 15th century with the completion of the bell tower, or the Pey-Berland Tower, as well as the two 81-meter towers on the north façade. One of the largest in France with a wingspan of 15 meters, the organ was restored in 1982.

The Tympanum : Below, the lintel depicts the Last Supper. Above, you can see the ascension of Christ among the twelve apostles. At the top of the tympanum, God is portrayed as a Christ enthroned between two angels.

The tower bears the name of the archbishop who built it. In a flamboyant Gothic style, the bell tower of Saint André Cathedral has a spire topped by a statue of Our Lady of Aquitaine. The choice to separate the construction of the tower from the cathedral meant that larger bells could be used, whose vibrations could have weakened the structure of the whole building. Magnificent views of Bordeaux from the terraces. 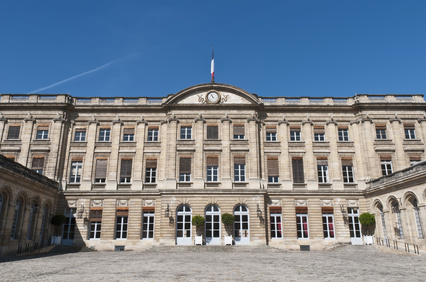 Ferdinand Maximilian Mériadec de Rohan built this residence when he became archbishop of Bordeaux in 1771. The palace became the seat of the City Hall from 1837 onward.
Not to miss : the grand staircase, considered a masterpiece of Renaissance antiques, the rooms on the ground floor in a Louis XVI style with carved linden wood and trompe-l'oeil figures.

The porte Dijeaux (1748)
Place Gambetta, 33000 Bordeaux
Its name comes from the Gascon "De Jou" (Jupiter), recalling that a temple of Jupiter sat at the same location during the Gallo-Roman era.