The Baths of Constantine, Arles

The Baths of Constantine, formerly called the Baths of the Trouille, were built along the Rhone River in the early 4th century. Their renovation dates back to the late 19th century. 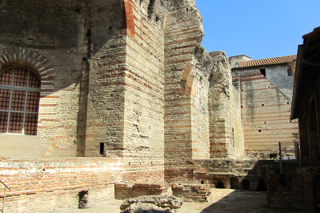 The success of the Baths of Constantine is due, in large part, to the invention of hypocausts (underground heaters), which circulated hot air under the floor, suspended by bricks (the suspensura). The air was then evacuated by vertical shafts. The good current condition of the hypocausts clearly shows the mechanism of heating swimming pools with air circulation. Large foyers warmed the main hot room (caldarium). This room was connected to the warm room (tepidarium). The tour begins with this room, before entering the hot room. The only rooms that are open for visit are located in the northern part of the baths.

The story... of the baths
Important place for urban life in Roman times, the baths assured personal hygiene for the population of the city. Every afternoon everyone – women first, then men – observed the rite of “dry sweating.” They then moved onto the hot bath where the skin was sprayed with hot water and then scrubbed with a “strigile,” a kind of small scraper, passing next into the warm room and the cold pool. It ended with a vigorous massage. In addition to their hygienic function, the baths also had a strong social role and were a popular meeting place. The entrance was free or inexpensive, and visitors could exercise in the palaestra (training hall), see shows or visit the library.