The Avignon Bridge (or the Saint Benezet Bridge), a major element in the history of Avignon, is known throughout the world thanks to the famous song based on this historic monument.

History of the Avignon Bridge

Construction of the bridge took place over several centuries. It was a permanent work in progress. A first piling was built at the end of the 12th century to house the Saint Bénezet chapel and to create a place of pilgrimage around the saint’s remains. The bridge’s first section was for decades one of the only components in the construction of the bridge.

In 1226, during the crusade against the Albigensians, King Louis VIII of France besieged Avignon which had sided with the Count of Toulouse. He prevents the people of Avignon from continuing construction of the bridge beyond this famous Saint Bénezet piling. The King’s order thus aimed to assert ownership over the Rhône. It is from 1230 that new pilings are built.

At that time there existed the brotherhood of the "l'oeuvre du pont", born from the influence of Bénezet and gathering 24 brothers. Perhaps it was their relentless quests that led them to build a stone bridge. Building a bridge over the Rhône was an extraordinary undertaking. From 1230 new pilings are built.

In the next century, the Popes residing in Avignon gave large sums of money to the works. The masoned bridge was perhaps completed around the middle of the 14th century, under the pontificate of Pope Clement VI. He probably used it to go to his summer palace in Villeneuve-les-Avignon, located a stone's throw from the Tour Philippe-le-Bel. But historians doubt that the work was ever finished in stone in its entirety.

At the end of this century, a new shrine dedicated to Saint Nicolas, saint patron of sailors, was placed above the Saint-Bénezet chapel.

The narrowness of the bridge did not allow the passage of cart. Its use was therefore limited to passage on foot or horseback. The bridge was built especially to control the important river traffic which was carried out on the Rhône and which constituted a major economic stake for Avignon thanks to the ports, the taxes and the tolls. The bridge was 920 metres long and had 22 arches. They were regularly washed away by floods in the following centuries. It was definitively abandoned in the 17th century.

The arches, including the four that remain, were constructed using a very spectacular technique. They are very open and low-profile, allowing for more space between the piles, 42 meters to be exact, in order for the water to pass without increasing the height. As such, the shape of the bridge is light and elegant. In the summers, when the Rhône was at its lowest level, nearly one hundred workers raised one or two pilings of the bridge with techniques still used today, such as the watertight cofferdam.

The first stone of the present tower was laid June 15, 1414. When you cross the drawbridge, the arms of the city, those of Innocent VIII and legate of Avignon Giuliano della Rovere, can be seen on the facade overlooking the river. 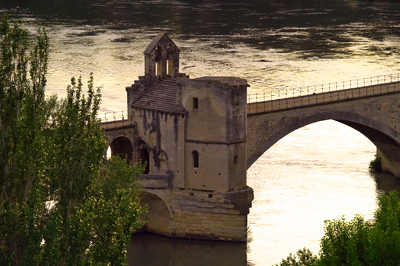 The Saint Nicolas Chapel is found on the second pile of the bridge. It has two sanctuaries, on two levels, one dedicated to Saint Nicolas (patron saint of boatmen), the other in Saint Benezet. The first is above the second. The Popes used to stop in front of the Chapelle de Benezet (Benezet Chapel) to pray. 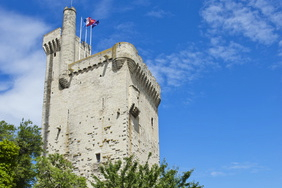 On the other side of the river, that of Villeneuve-Les-Avignon, stands the Tour Philippe Le Bel (Tower of Philip the Fair) on three levels. Though it stands at a height of 27 meters, it is not visible from the bridge, hidden by the trees on the other side. Erected in 1303, it was equipped in 1307 with a fortified gate that connects to the bridge. A watchtower is adjacent to the north and is 7 meters taller. The circular turret that overlooks the tower was added in the 15th century.

The legend of Saint Bénezet

In 1177, a young shepherd named Benezet descended the mountains of the Ardeche. He said he was sent by God to build a bridge in Avignon. At first residents took him for a fool, but he insisted that he had heard a voice from Heaven saying: "Benezet, take your staff and go down to Avignon, the capital of the waterfront: you shall speak to the people and tell them they need to build a bridge." Mocked by the inhabitants of Avignon, the shepherd was challenged by the prelate (a clergy member) to load a huge stone on his shoulders and throw it into the Rhone. Without hesitation, and in front of the amazed crowd, Benezet hefted the stone above his head before throwing it into the water, and helped, they say, by divine intervention and even angels bathed in a golden light.

This beautiful legend of Saint Benezet was passed down through many generations, as the construction of the bridge was a challenge to the elements.

If the documents attest the existence of Benoît, Bénezet in Provençal language, they rather present him as an entrepreneur who organized donations to collect money to build a bridge. By the end of the 12th century, work had barely begun when he died. A chapel was then built on one of the first pilings of the bridge and given the name of Bénezet to receive his relics.

In the 16th century, Pierre Certon, a well-known composer from Paris, wrote a Catholic mass, "Sur le Pont d'Avignon", whose melody is relatively far from the song we know today. The melody of the current version of the nursery rhyme first appeared in 1853 in Adolphe Adam's operetta entitled "L’Auberge Pleine". International success came a few years later with another operetta, debuted in 1876, which was eventually called "Sur le Pont d'Avignon".

The residents of Avignon, did not, in fact, dance on the bridge, its narrowness allowing neither music nor dancing. However, the formation of islands, especially that of Barthelasse, incited the development of picnic areas and taverns that transformed the banks of the Rhone in a place of relaxation and leisure in the 19th century. So, the inhabitants of Avignon did indeed dance … though it was more under the bridge than on it.

Lyrics of the song