The Bridges of Paris

No less than 22 bridges and footbridges connect the banks of the Seine in the classified area of this World Heritage Site.

Presented here are the most significant bridges, whose personal history with the river has often played a major role in trade between the two sides. They are presented from west to east. 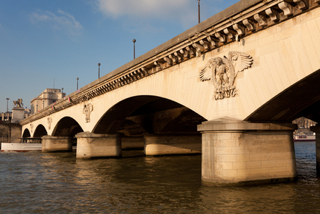 Connects the Eiffel Tower and the Trocadero.
It was Napoleon who decided on its construction in reference to winning the battle of Jena in 1806. It was completed in 1814, linking the Military Academy to the right bank of the Seine. Four knights open access to the bridge at both ends. On the left bank: a Gaul and a Roman, on the right bank: an Arab and a Grecian. In the early 20th century it was expanded and consolidated. On the bridge piers, the tympanums are decorated with imperial eagles. 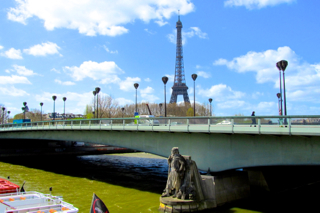 Connects the Place de le Résistance to the Place de l’Alma.
This bridge, now famous since the death of Princess Diana, was built under Napoleon III to celebrate his victory in Crimea in 1854. Of particular interest is the statue of the Zouave, which measures the flood levels of the Seine, and the copy of the Flame of Liberty given by the United States in gratitude for the restoration of New York’s famous statue.

This tour leads visitors a few hundred meters into the heart of the bowels of Paris, an unusual way to discover the history of the city, from its origins to the present day.

Closed for renovation until 2020. 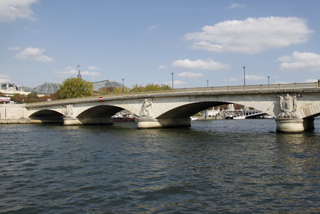 Connects the Boulevard de la Tour Maubourg and Avenue Franklin Roosevelt
A first bridge was initially built at this location in 1829. Poorly designed, it was destroyed in 1854. Taking the piles of the first bridge, its successor was built the following year. The center stack is adorned with allegorical sculptures: the land victories are represented upstream, and the maritime ones downstream. Other piles are decorated with military trophies. 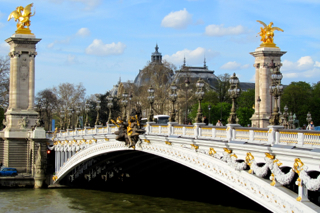 Connects Avenues Gallieni and Churchill
The bridge consists of a single arch, dedicated to the Franco-Russian friendship, and was designed for the World’s Fair of 1900. At the top of the four towers that adorn the 17 meter-tall north and south entrances, stand Pegasus figures in gilded bronze representing the Arts, the Sciences, Trade and Industry. At their base, the bas-reliefs represent great moments in the history of France, from Charlemagne through the Renaissance and Louis XIV, and on to the 20th century. You will also notice two copper compositions on the bridge: Nymphs of the Seine upstream and Nymphs of the Neva (Russian River) downstream. Pont Alexandre III is one of the most important artistic monuments of its time. 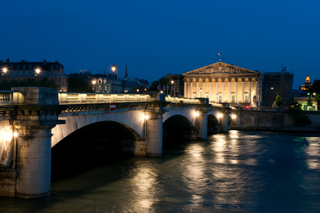 Connects the Place de la Concorde and the Quai de Solférino, facing the Palais Bourbon
Built by Jean-Rodolphe Perronet, director of the National School of Bridges and Roads, it was completed in 1791 on the site of the old ferry that connected the two banks. It is built with stone that came from the destruction of the Bastille during the attack on July 14, 1789. Though several monumental statues adorned the bridge in the 19th century, they had to be removed and transferred to Versailles to prevent its collapse. It was refurbished and renovated several times during the 20th century. 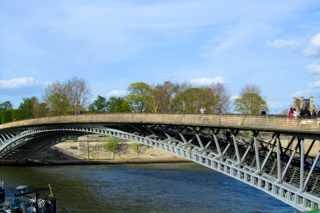 Connects the Musée d’Orsay to the Tuileries Garden
In 1861 Napoleon III inaugurated the first bridge over the river at this location. For over a century it was known as the Solferino Bridge in reference to the battle won by Napoleon. Too fragile, it was later replaced by a steel bridge that lasted only 30 years until 1992, before giving way to the Passerelle Leopold Sedar Senghor, named in tribute to the prominent writer and politician who died in Senegal 2001. 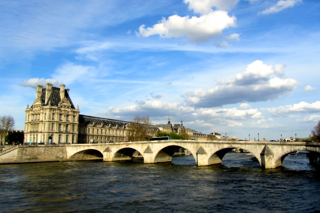 Connects the Quai des Tuileries and the Quai Anatole France
The particularity of the Pont Royal is in the blocks of stone with which it was built. Indeed, previous attempts of constructing a bridge on this location had all failed, so Louis XIV decided to build a stone bridge of exceptional size that could withstand flooding. It was completed in 1689.

The booksellers of the Seine riverbanks

From Pont Royal to Pont de Sully, for the past four centuries, booksellers have been perpetuating the country’s literary traditions. Easily recognized by the rows of green boxes, visitors can find books, journals, postcards and posters, and even small wonders like first editions, original prints or rare novels. 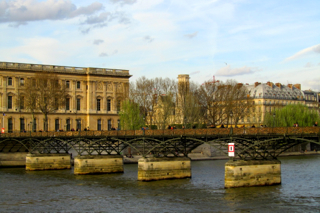 Connects the Institute of France and the Louvre
The Pont des Arts is named after the Louvre, which at the time of the bridge’s construction was also called the Palais des Arts. The first iron bridge built in Paris in 1801, the current bridge dates back to 1984. The original bridge was destroyed in 1979 because of damage endured by the bombardments during the two world wars. 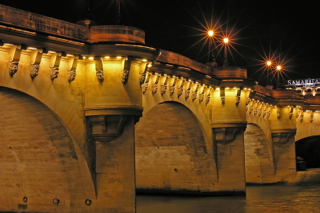 Connects the Quai des Grands Augustins and the Quai de la Mégisserie
The oldest bridge in Paris, it is composed of 12 arches and adorned with half-moon turrets on each pile, which served as shops until the 19th century, as well as many macaroons, comical faces that adorn the cornices (there are over 300). This bridge was doubly innovative for its time: for the first time a bridge was lined with sidewalks for pedestrians, and for the first time in France a human statue, namely that of Henri IV, was exposed on a public road. 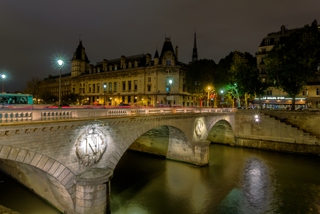 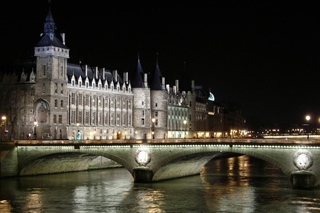 Connects the Ile de la Cité and the Place du Chatelet
It seems that a bridge existed here in ancient times; others then followed over the centuries. An important thoroughfare, it was one of the only ways to connect the island to the city that stretched across to the right bank. Its name comes from the moneychangers and goldsmiths from 17th century, but the current bridge dates back to1860. 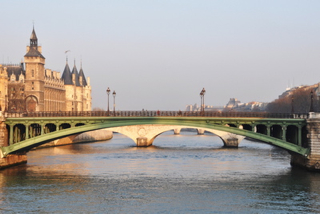 It connects the Ile de la Cité to the Quai des Gesvres
Just like the Pont au Change, the Pont Notre-Dame was built on a bridge site that has existed since antiquity. Several bridges were built and replaced until the 15th century, when one with houses and shops was constructed. Destroyed in 1499 during a major flood, the wooden bridge was replaced by a stone bridge in 1507. The new bridge continued to host around sixty houses and shops on several levels. In the 18th century the houses were destroyed and in 1853 a new bridge was built as part of Baron Haussmann’s redevelopment. The architect of this bridge, Jean Resal, also designed the Pont Alexandre III. Thereafter, the initial five arches were reduced to three in order to reduce the number of marine accidents they engendered. 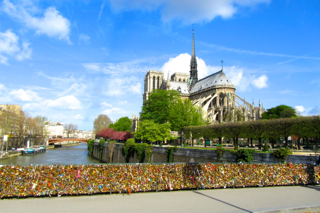 Connects the Quai de la Tournelle to Notre Dame Cathedral
Built in 1828, this bridge takes its name from the Archdiocese which was located nearby. It was destroyed after the anticlerical riots of 1831 and the plundering of which it was the target. This bridge is the narrowest in the capital. The three arches, weakly opened, hamper river traffic, but despite a decision taken in 1910, the bridge will never be replaced. 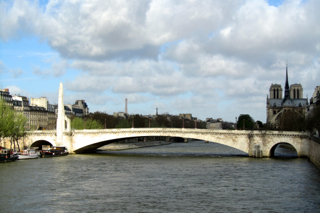 Connects the Quai de la Tournelle to the Ile Saint Louis
An earlier stone bridge built in 1656 had to be demolished to improve the flow of the Seine. The current bridge dates back to 1928. A statue of Saint Genevieve, the patron saint of Paris, adorns one of the piles. 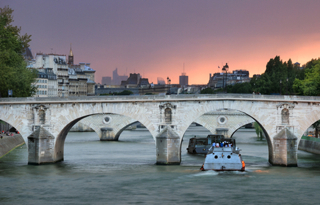 Connects the Ile Saint Louis to the Quais des Célestins and the Marais
At its construction, 50 houses were built atop the bridge. In 1658, the Seine flooded, carrying a part of the bridge and houses with it, taking 60 lives. The bridge was rebuilt shortly thereafter and a century later the remaining houses were finally razed. 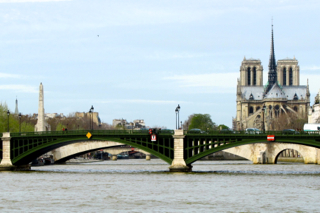 Connects the Quai de la Tournelle to Boulevard Henri IV
The present bridge, which the city owes to Baron Haussmann’s urban renovation, replaces a previous bridge destroyed in 1848. Its southern part is made of cast iron, and the northern part is made mostly of stone. It is the last bridge within the classified area to the east of the capital. From the south are beautiful views of the Ile Saint-Louis and the Notre Dame Cathedral.