The landscapes of the Causse du Larzac are marked by the jasses (sheep pens) and the lavognes scattered on the plateau. Limestone is ubiquitous in the architecture , this stone resonates like the signature of the caussenards landscapes.

The Order of the Temple, founded in 1120 in Jerusalem, was composed of the "Knights of the Order of the Temple", both monks and knights, whose mission it was to defend the roads in the Kingdom of Jerusalem. The Templars were granted many donations of land that were organized into commanderies and whose income was intended for the Holy Land. Just two centuries after its creation, upon an order of King Philippe le Bel, all Templars in the kingdom were arrested under various pretexts and in 1312 the order was abolished. Quickly the Templars took possession of the Larzac plateau thanks to donations of land. They developed sheep grazing, essential to the production of Roquefort cheese.

The Order of Saint John of Jerusalem was created in the 12th century at the same time as the Templars, near the Holy Sepulchre in Jerusalem. The order quickly turned to a military organization while retaining its original vocation of hospitality. At the demise of the Order of the Templars, the Hospitallers took command and ensured their legacy.

Between the Causses and the Cevennes, Saint- Jean du Bruel is a village with picturesque streets. Note the hall, the church, the Pont Neuf from the 18th century and the Old Bridge from the 13th century.

The territory of Nant, located at the confluence of two rivers, has been inhabited since the 10th century by a community of Benedictine monks. They installed channels still visible upstream to promote the irrigation of orchards and vineyards.
Not to miss: the Saint-Pierre Abbey 11th century and other Romanesque churches and chapels of the territory. Pont de la Prade (bridge, 14th century). Chappelle des Pénitents. The Halle Caussenarde from the 18th century.

In the Surrounding Area

Bison ranch located on the Causse Noir. Many family activities in a western atmosphere. Restaurant on site. Accommodation possible.

The Templars and Hospitallers Tour
The audio-guided tour includes five major sites of the Causse du Larzac : The Cavalry, Sainte Eulalie de Cernon, the Viala Pas de Jaux, Saint Jean d' Alcas and The Couvertoirade. These towns, with the exception of the Cistercian fort Saint Jean d' Alcas, all belonged to the Commandery, which was founded in the 12th century by the Knights Templar.
The entrance fee includes preferential pricing for visiting the 5 sites with an audioguide. This package is sold at all information desks at the 5 sites of the "Templar and Hospitalier du Larzac." An audio guide is available in the various Tourist Offices upon presentation of the Audiopass ticket. Price : €16 for all the sites. 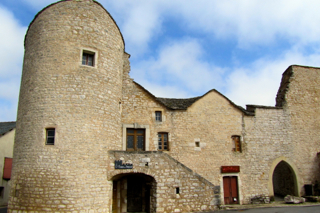 The Cavalery has a rich heritage bequeathed by the Templars and the Hospitallers. The Templars Order of Sainte Eulalie established themselves here in the 12th century due to the strategic location of the site near the ancient passageway through the Larzac. The fortifications, impressive and beautifully restored, were built by the Hospitallers in the 15th century. 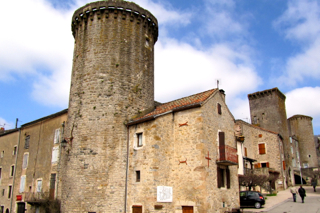 The Templars invested in site from the 12th century, and was their first location on the plateau. Then after the fall of the Order in the 14th century, the Hospitallers developed the town. This charming village and its walls mostly date from the 15th century onward. An entire north wing with its Romanesque church and a loft tower remains from the time of the Templars. Conservation of the Commandery is exceptional and alone retraces 600 years of Larzac history.
Not to miss: The Commandery, the square and its 17th century stone fountain, the Romanesque church of the Knights Templar, the refectory and Hospitalliers’ dormitory.

In the Surrounding Area with Children

The village was founded by the Hospitaliers in 1315. They built a church and then in the next century, fortified the town with a 30-meter tower to serve as a refuge for the population during conflict and as a granary. Beautiful view from the terrace. 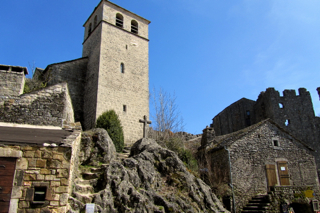 The Couvertoirade reflects the military power of the Templars that were present in the 12th century. The village developed at the foot of the castle (13th century) and the church (14th century) perched on a rocky promontory. It is fortified with walls and towers from the 15th century. Be careful about children during the visit, the walkway that connects the two has no barrier.

Ranked among the most beautiful villages of France for its medieval appearance, it offers an exceptional structural heritage describing centuries of architectural influences and the occupation of the Causse. The history of the Templars, Hospitallers and Caussenards is told here in these streets surrounded by walls.

Not to miss: the village is small, but everything is a must-see, including: the church, the cemetery, the castle of the Knights Templar, the caussenardes houses, and outside the walls, the largest paved lavogne in Larzac.

Paid parking for access to the city, daily price: €4 per vehicle.
There is no ATM within the city walls.

In June, the Great Celebration of sheep takes place during the climb to the mountain pastures.

Many guided tours are organized every day from March until November 11th by the information desk (Price €6.50 - duration:1h30). The tourist office offers audio-guided tours of the city. Price € 5.
There are many walking and hiking opportunities around the village. More information at the desk.
For children: visit with a treasure hunt. Duration: 2h30 (reservations required) . 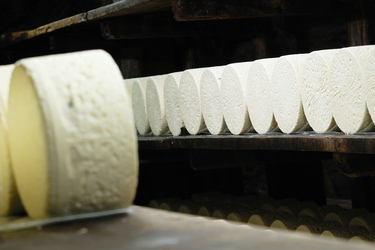 Essential heritage of the Causses of Larzac, Roquefort cheese (from the name of the village) is the result of a deep, intimate bond among humans, animals and nature. It is here, in particular, that the legacy of centuries of agropastoralism unfolds. Although the village is of little interest, a visit the to the cellars of Roquefort should not be missed. It is there, in the rock, in a natural underground maze ventilated by fleurines (faults) that the famous blue cheese is slowly refined by the fungus "penicillium roqueforti". And thus perpetuates an ancient tradition.

It is quite cold in the cellars, remember to dress accordingly for visits.

Fortified medieval village from the 15th century. Not to miss: the fort, and the church and its stained glass windows.

For children: every Friday during the summer, an activity based on the fort and on nature allows children to discover the Middle Ages. Activities upon reservation. €4 per child.

Visit of Causses and Cévennes