The Castle, Palace of the viscounts

The castle, medieval city of Carcassonne

Ultimate fortress and palace of the viscounts, the citadel never fell at the hands of an enemy. Its defensive system was so sophisticated and so complete that no one ever dared to attack, not even the Black Prince after having seized the lower part of the town. 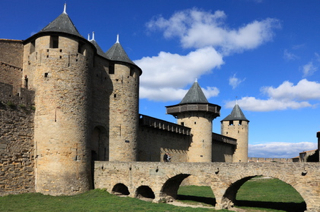 Guided tours of 45 minutes are included in the entrance fee to the castle. In French, English and Japanese.
Informative guided tours of the castle and ramparts are possible with a tour guide (Full price/ reduced price: €12.50/ €9).

For children: educational activities. Strollers are not allowed inside the castle (to leave at the entrance).

In the Roman era
The castle was built around 1130 by the Trencavels. The construction extended over two buildings in an L shape, dominated by a watchtower, the Tour Pinte, which is the tallest building in the city (and very well preserved). Around 1150, the castle was completed by a chapel, which forms a U around the central courtyard. The remains of the apse of the chapel, dedicated to Mary, are still visible. This era was the castle’s finest hour. Do not miss the well-preserved paintings of the round room illustrating the Song of Roland that date back to this time.

The Royal Era
In the years between 1228 and 1240, during the reign of Louis IX, the castle became a fortress, and had a fortification (80 meters by 40 meters) instead of palisades. Two gates were inserted, whose function was to control access: one gate was framed by twin towers (towards the interior of the city) and another to the west (on the side of Aude Gate). In this era, the castle was also enhanced with a second floor and a new building took place on the southern edge, against the curtain wall. The castle and its curtain walls have nine towers, and were also protected by the Aude Barbican. The castle had indeed become an impenetrable fortress. It consists of two main buildings and two courtyards: the Cour d’Honneur and the Cour du Midi. From the courtyard you can see the architectural styles from the different periods of construction on each level of the castle: Romanesque, Gothic and Renaissance towards the top. 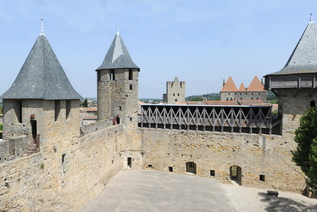 The tour begins with the keep which dominates the corps de logis (principal block). In the 12th century, it is the heart of the Palace of the Trencavel dynasty. The tour continues with the Guet Tower which is based on the walls built during Antiquity (4th century).
After viewing the 11-minute film "On the Traces of the City", you will have a view of the 13th century western ramparts from the hoardings (wooden galleries). You cross successively the tour des Casernes (tower of barracks), the tour du degré, the tour de la chapelle (tower of the Chapel), the tour de la poudre (ammunition depot).
The visit of the comtal castle ends with the lapidary museum which traces the history of the city thanks to the vestiges, furniture, sculptures and objects found on the site and in the surroundings. Most dating back to the medieval period. Note the original statue of Dame Carcas (16th century).

The visit continues on the north Gallo-Roman ramparts. Access is at the bottom of the castle courtyard on the left. They cross the tour du Marquet, tour du Tréseau and close the city until the porte Narbonnaise.

Finally, the western ramparts, accessed from the cour du Midi, will make you cross the tour de la Justice (tower of Justice), the Porte d'Aude, the tour carrée de l’Evêque (square tower of the Bishop) and join the Porte Saint-Nazaire.