Courtyards and Gardens of Fontainebleau

Like the buildings, the yards and gardens of the Palace of Fontainebleau experienced significant transformations over the centuries. Irregular courtyards were created in harmony with the successive additions onto the Palace. 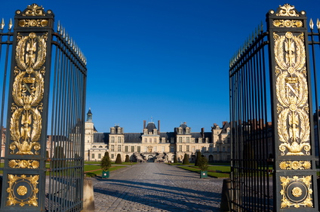 This courtyard was called the Courtyard of the White Horse ever since Charles IX had a plaster horse installed at its center in the 16th century in honor of the equestrian statue of Marcus Aurelius in Rome. It then took the name Courtyard of Honor in the 18th century. Later, it was again renamed the Farewell Courtyard, recalling when Napoleon I bowed to his guard before his departure for Elba on April 20, 1814. On the left stands the Aile des ministres (Ministers’ wing, from the 16th century).

In front of the courtyard, in the wing of the horseshoe staircase (16th century), presented from left to right: the Chapelle de la Trinité (Trinity Chapel), the grand horseshoe staircase, work of Jean Androuet Hoop (1632 - 1634) and the arcades, which gives access to the Cour de la Fontaine (Fountain Courtyard). Finally, the Louis XV wing, formerly the Galerie d’Ulysse (Ulysses Gallery), closes the courtyard on the right. This wing is home to the Théâtre Napoléon III (Napoleon III Theater). 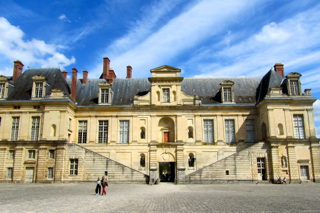 Created in the early 19th century, the fountain, decorated with a statue of Ulysses (1812), gave its name to this courtyard where servants drew water for the king. Upon entering the Fountain Courtyard by the arcades, one passes under the Aile des Reines Mères (Queen Mothers’ Wing, 15th century), and the Etang des Carpes (Carp Pond) opens the view to the gardens. The Aile de la Belle Cheminée (Beautiful Fireplace Wing, 16th century), the work of Primatice, sits to the left. Facing the pond stands the Aile de la Galerie François I (François I Gallery Wing). The Gros Pavillon d’Angle (The Grand Angle Pavilion, 18th century), is the work of Jacques Ange Gabriel (architect of King Louis XV), and completes the architectural composition of the ensemble. 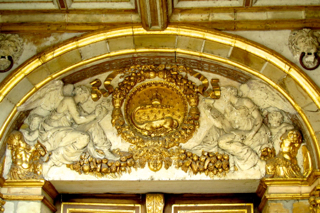 The oldest of the Palace collection, the Oval Courtyard is probably located on the site of the courtyard of first Palace of Fontainebleau. The facades that surround it date back to the 16th and 17th century. It overlooks the Cour des Offices (Office Courtyard) through the door of the Baptistery and leads to the Cour da la Fontaine (Fountain Courtyard) through the Porte Dorée (Golden Gate, 1528), decorated by Primatice.

Built under Henri IV in the early 17th century, the Office Courtyard was mainly used for domestic purposes, and was used by the staff of the palace (kitchens) and the officers (residences). It served as the entrance from the city. It is guarded by two heads of Hermes, made by the sculptor Gilles Guérin (1640). This courtyard is currently inaccessible due to major restoration work.

The story ... of the lucky  lily-of-the-valley
One day in May 1559, Catherine de Medici, on the way back to the Palace after consulting the famous Nostradamus, picked several strands of lily-of-the-valley on the palace grounds. Her son, the future Henry III, captivated by the beauty and fragrance of its bell-shaped blossoms, would later offer them to the ladies of the court adding, “May these flowers bring you luck" ... And thus was born the tradition, celebrated every 1st of May in France.
Source: Tourist Office of Fontainebleau. 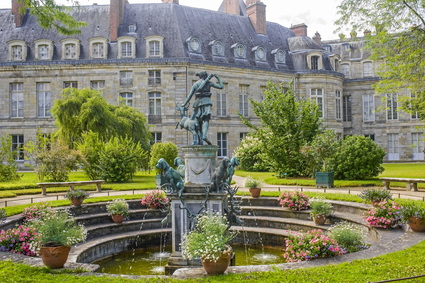 This romantic and bucolic garden is named after Diana, goddess of the hunt, whose statue adorns the fountain created under Henry IV in 1603. This was the Queen's garden; indeed it was Catherine de Medici who initiated its creation. The English garden that visitors can stroll along today was achieved through the development of Napoleon I and Louis-Philippe. It is bordered by the Galerie des Cerfs (Gallery of Stags) toward the east, the Petits Appartements (Small Apartments) toward the south, and the Chapelle de la Trinité (Chapel of the Trinity) and the Jeu de Paume toward the west. 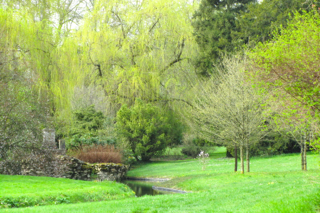 Formerly called the Jardin des Pins (Pine Garden) under François I, the English Garden was long left unattended before being revamped under the first Empire. Planted with rare and old trees, dotted with exquisite statues, it is divided by an artificial river. At the end of the Aile Louis XV (the Louis XV Wing, near the Napoleon III Theater) stands the Grotte des Pins (the Pine Cave), created for François I in 1543. It is decorated with colossal rustic statues of Atlantis, a style in vogue at that time.
Towards the back of the garden, in the middle of a grove, a pond marks the location of the Fontaine Belle Eau, for which the palace was named. 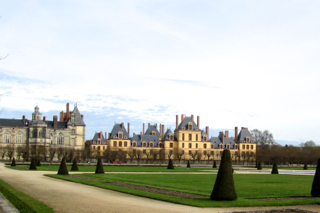 Designed by François I and restored under Henri IV, the current Grand Parterre is the work of André Le Nôtre and Louis Le Vau, architects of Louis XIV. Spread over 11 hectares, it is the largest garden in Europe. Although its initial landscape decoration was not preserved under Louis XV, the garden still retains its beautiful ponds today. Visitors should note in particular the waterfall basin and its statues, as well as the statue representing the Tiber River that adorns the pond. The Grand Parterre was the principal mark left by Louis XIV during his time at the palace. 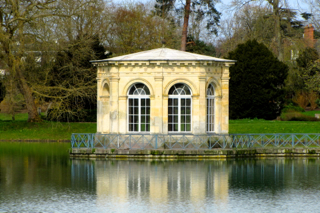 François I turned the swamp into the decorative Carp Pond, and was the first to create a water mirror. This technique would subsequently be copied across Europe. In the tradition surrounding the basins on royal domains, carp were raised and served at the table of kings. The pavilion of the pond, created by Henri IV and rebuilt by Louis XIV in 1662, was restored in 1807. 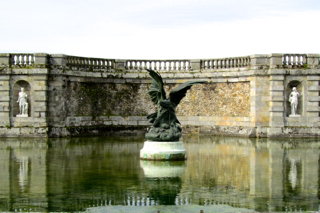 Carried out by Henry IV, the Grand Canal is 1.2 kilometers long and 40 meters wide. It remains popular with fishers and walkers.

Covering an area of 84 hectares, the park once marked the boundaries of the royal domain. Characterized by its star-shaped intersections straight paths, it connects Fontainebleau to Avon. The alleys allowed the ladies of the court to follow the hunts from their coaches.