Fortifications of the medieval city of Carcassonne

Fortifications of the medieval city of Carcassonne

Military art greatly influenced the architecture of the medieval city of Carcassonne. Its defense system is exceptional in its size, complexity and the quality of its preservation. It is the largest fortress in Europe. The curtain wall is accessible via four main gates, located at the four cardinal points, which access the interior of the city. The main entrance is located at the Porte Narbonnaise.

Outer curtain wall
During the 13th century, the kings of France ordered the construction of a second curtain wall around the medieval city. Built to double the ancient ramparts, the outer curtain wall is 1,600 meters in circumference and the reach a height of 10 to 12 meters. It is built of rustic stones (raised facades) from nearby sandstone quarries. It was equipped for defense with arrow slits for crossbows, 14 circular towers, 3 barbicans (fortified outposts protecting access) and 2 turrets (small sentinel towers). The construction of this second enclosure allowed for two lines of fire ; the outer wall slowed and divided the attackers. When assailants reached the bailey, they were particularly vulnerable in this area without shelter, at the mercy of shots from the inner wall. In addition, the towers are open on the interior side to prevent invading attackers to seek refuge there. 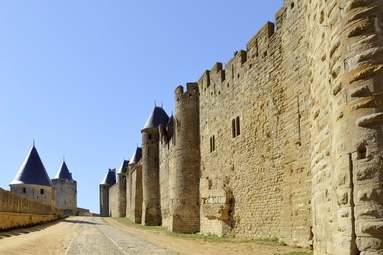 Inner curtain wall
The curtain wall of the Lower Roman Empire, from the 3rd and 4th centuries, runs over 1,200 meters around the hill, and is composed of 26 circular and horseshoe towers. The foundations of the original enclosure are still visible from the bailey, in large stones that date back to the 1st century AD. The alternating layers of red brick and rectangular stones date back to the 4th century. The rustic rectangular stones are part of the modernization led in the 13th century under Philip III the Bold and Philip IV the Fair.

Flattened and installed during the creation of the outer curtain wall, the bailey formed a large field between two lines of fortification. After having abandoned its military function, from the 18th century onward, the bailey was inhabited, and houses were set around a central street. In the early 20th century, the bailey was completely cleared to restore the fortress’s medieval appearance.

The Porte Narbonnaise
The Narbonne Gate was constructed in 1280 during the reign of Philip III the Bold. It owes its name to its orientation towards the city of Narbonne. It is flanked by two imposing twin towers, in the form of an almond, its point designed to deflect shots from attackers and shocks from battering rams. Also equipped with a club, the defense system was supplemented by arrow slits that protected the rafters. This gate was protected by the Saint Louis Barbican, directly in front (a barbican is a fortified outpost that protects a passageway). It was equipped with chimneys and tanks for more comfortable occupation during the prolonged sieges. The floors feature a beautiful Gothic architecture. Figures of the Virgin (in a lopsided position) and Child are situated above the door in a niche. Restored in 1860, the towers were equipped with new slate roofs to recreate their 13th century appearance.

The Porte Saint Nazaire
One of the two square towers of the medieval city (along with the Tour de l’Evêque). Fitted with a complex defense system, the tower protected the Saint-Nazaire and Saint-Celse Cathedral. The structure was rebuilt between 1864 and 1866. 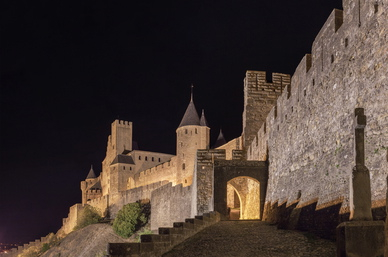 The Porte d’Aude
To the west, the Aude Gate faces the river that shares its name. Located near the Château Comtal and inserted into the curtain wall, this gate is the major entrance to the medieval city from the Bastide. The defensive system of this gate was complex and comprehensive. High arches hide false doors leading nowhere to deceive the enemy. The gate was also protected by the Aude Barbican (1239), destroyed in 1816, and by the Tour de l’Evêque (see below). Eugène Viollet-le-Duc used this site to build the Saint Gimer Church (1854). This gate, with its typical medieval appearance, was the setting for many films, such as "Les Visiteurs" (The Visitors). Today, it houses the Musée de la Chevalerie. Beautiful view of the castle and ramparts.

The Porte du Bourg or Porte de Rodez
The Rodez Gate (or Bourg Gate) is a modest gate that was inserted into the curtain wall that connects the Tour de la Marquière and Tour de Samson. It was defended by the Notre Dame Barbican and Tour Mourétis. 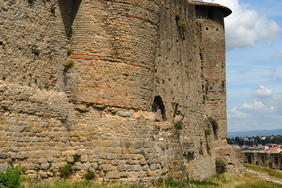 The Tour de l’Inquisition
The Tower of the Inquisition :  This tour housed the seat of the court of the Bishop, though the chains and dungeon suggest that justice must have been severe.

The Tour de l’Evêque
The Tower of the Bishop : The name of this tower references the former Episcopal palace, located nearby. Its square column rises above the two lines of fortification. It was designed to defend the Aude Gate. Beautiful view from the top.

The tour du Trésor
The Treasury Tower  : Probably the most beautiful. This tower, whose name evokes the tax administration that was housed within its walls during the 14th century, is a semi-circular construction. Three of the five levels housed the archers. The top two floors were used to defend the area with a series of openings and a walkway.

The Tour Saint Martin
The Saint Martin Tower : This tower is characteristic of the fortifications realized under Philip the Bold (1270-1285). Constructed in rustic stone, the tower’s almond shape was designed to deflect projectile impacts.

The Tour Saint Sernin
The Saint Sernin Tower : Built on the eastern front of the fortification, this Gallo-Roman tower is, like the others, shaped like a horseshoe.

The Tours du Moulin du Connétable, du Vieulas et de la Marquière
The Constable Mill, the Vieulas and Marquière  Towers : Located on the northern part of the walls, these three ancient towers were raised on large cubic bases. During the restoration work, Viollet-le-Duc chose to reproduce the sloping roofs so that they retained their original shape. A guided tour of the towers is free when combined with a visit of the castle.