Visitors will be captivated by the medieval atmosphere of the old neighborhoods that revolve around the cathedral. Walk along the streets of the Castelviel quarter, cradle of the city, or in the Castelnau quarter, picturesque neighborhood with narrow streets and half-timbered houses, or even in the village of Sainte Salvi with its collegiate church and cloister. And overlooking it all, the banks of the Tarn River offer a magnificent view of the historic center.

The House of Vieil Alby stands as one of the oldest houses in Albi, combining a brick façade and a timber frame in the half-timbered architecture style of the town. It is located in the Castelnau neighborhood, in the heart of the old center. The house is characterized by the open attic, called "Soleilhou," where crops and pastel were dried. The house also hosts temporary exhibitions. 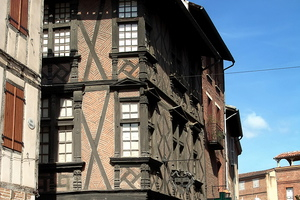 L'Hôtel de Rivières
10 Rue Saint-Clair, 81000 Albi
Named after the family of wealthy pastel merchants, the mansion that remains today dates from the 17th and 18th centuries, and still retains a great door and two corner towers from its original structure. Of particular note are the alternating bay windows ​​of stone and brick.

L'Hôtel de Gorsse
Place Henri de Gorsse, 81000 Albi
Though part of the mansion still shows evidence of its original medieval architecture, its uniqueness lies in the mix of architectural styles from two different periods: Gothic and Renaissance. The mansion also includes a watch tower, a symbol of the power and wealth of the owner.