Marie-Antoinette’s Estate, near the Grand Trianon and its gardens, is composed of the Petit Trianon and the Queen’s Hamlet.

This area, which extends over several acres, was given to Marie-Antoinette by her husband in 1774. Uninterested in the protocols and the splendor of the castle, she preferred to be closer to nature, away from the bustle of the court and freed from the rules of etiquette in effect at the palace. She is undoubtedly the queen who had the most influence on her husband, leaving her mark on Versailles like no other before her. This was her domain, and no one could enter without an invitation.

Created in 1749 by Gabriel, the French garden that can be seen today was redesigned in 1774. The garden’s architecture is organized around the pavilion in the center of a crossed path, and at the end of each extremity sits a circular pond. These basins are decorated with lead sculptures of children playing with fish and birds by the artist Rousseau. 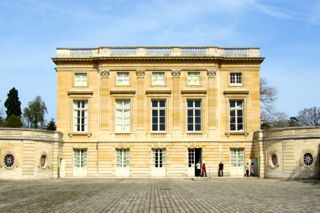 The Petit Trianon is considered the Queen’s castle. Attention visitors: some of the rooms are only open to visit as part of guided tours.
The creation of the Petit Trianon was requested by Madame de Pompadour, mistress of Louis XV. Gabriel  executed the project in the 1760s, and built a castle inspired by ancient temples and adorned with Corinthian columns. The completion of the Petit Trianon was the peak of Gabriel’s career. Completed in 1769, it was the Comtesse du Barry (who had succeeded in attaining Madame de Pompadour’s role in the meantime) who inaugurated the Petit Trianon. But it was Marie-Antoinette who benefited most from the building, wishing to break away from the constraints of palace life and the court. Creating a personal and intimate universe, she established a theater company, and had an English garden installed.
With its simple and elegant style and refined interior, the Petit Trianon is considered a masterpiece of neoclassical architecture. On the façade facing the French garden, the wooden decorations are of an exceptional elegance. The ground floor is dedicated to the staff and service, and the first floor houses the reception rooms and apartments of the Queen. The King’s Apartments are located above the mezzanine, on the top floor. 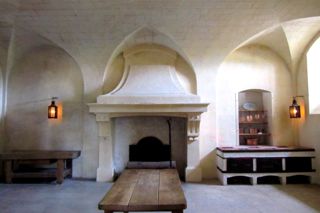 First, visitors are presented with the guardroom and the hall, the majestic entrance, designed as a true interior courtyard and a magnificent staircase. The tour continues through the billiard room of Louis XV. Also on the ground floor, the room called the “réchauffoir” allowed servants to keep the dishes warm when far from the kitchen (which was located away from main house) before they were served to guests upstairs. The room has a beautiful stone architecture, including the flat vault ceiling and a beautiful fireplace.

The grand staircase provides access to the first floor. Composed of seven rooms, four were for receptions. All the decoration of the upstairs, from paintings to wood paneling, evokes the theme of nature, very dear to Marie-Antoinette.

The Salon de Compagnie, the main room, was used as a game and music room.
In the cabinet des Glaces mouvantes Marie-Antoinette had Mique install a clever system of movable mirrors to obtain an extraordinary boudoir.

Marie-Antoinette has this theater designed and constructed by architect Richard Mique. Unlike the Versailles Opera, venue of the great operas from renowned theater companies, The Queen’s Theater was used for plays and operas put on and played by the Queen herself, who, they say, was very good. The outside, simple and even austere, contrasts with the delicacy of the interior decoration, which depicts scenes from plays performed by the Queen. On the ceiling Apollo can be seen in the middle of the Graces and the Muses. The treasure of the theater lies in its remarkable and complex machinery enabled for scene changes. 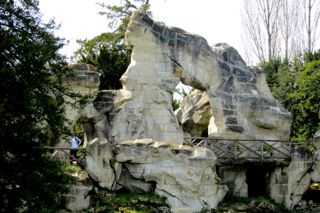 The Rocher, The Montagne de l’Escargot and the Grotte

Around the Petit Trianon, landscapes and vegetation were recreated, reminiscent of Switzerland. The installation of artificial rock (le Rocher) next to the gazebo was a technical challenge that required four years of work, from 1778 to 1782. Next to the gazebo also stands the Montagne de l’Escargot (Snail Mountain), an artificial hill leading to a terrace. At its base, a small path leads to the cave (la Grotte) whose entrance is somewhat hidden. A bucolic and romantic refuge, the Queen could see incoming visitors through an opening in the rock, and a narrow staircase allowed her to escape those who were unwelcome. 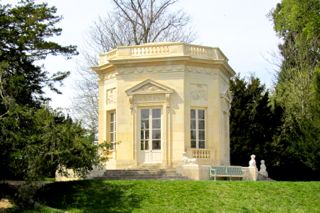 This octagonal music kiosk overlooks the lake. Its decoration is dominated by images of nature, such as the four seasons, the pleasures of hunting, gardening and representations of fruit, as well as finely carved arabesques, which can be found on the inside. 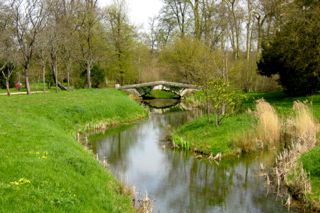 Before Marie-Antoinette made this the site of an English garden, it was occupied by the botanical garden of Louis XV. Unlike in French gardens, where natural elements are controlled in geometric forms, English gardens are more picturesque, presenting a series of recreated natural landscapes that give the garden the rural look so sought out by the Queen. 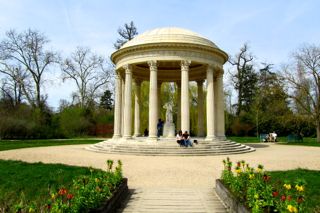 The Temple of Love is in a neoclassical style, with a series of sumptuous marble sculptures by Deschamps. The particularly outstanding sculpture "Cupid carving his bow from the club of Hercules," is a copy of Bouchardon’s original work (housed at the Louvre). 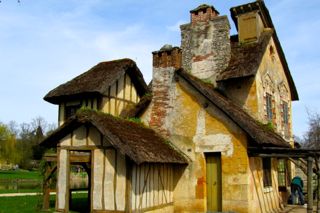 Marie-Antoinette wanted to get closer to a more rustic way of life. It is for this reason that she had a hamlet built where she could find the charm of country life. Organized around a pond (called the Grand Lac), Richard Mique imagined a small picturesque village of a dozen houses, a farm and a mill.
Around these houses sat a real farm run by a farmer: fields, gardens, orchards and livestock fed the table of the court. The Queen’s House is at the center of the hamlet. 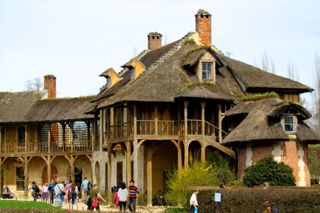 Consisting of two buildings connected by a gallery decorated with flowers, the Queen’s House is the main building of the hamlet. The right wing holds queen's apartment (dining room and game room downstairs and two rooms and a Chinese cabinet upstairs). The left wing holds the billiard room and an apartment with five rooms upstairs. The décor is elegant and sophisticated yet simple, far from the ostentatious luxury of the palace.