The Palace of Tau, adjoining the cathedral, was the residence of the archbishops of Reims. Built by Bishop Nicaise in the 5th century, it was later elegantly decorated, renovated and enlarged over the centuries. It owes its name to its original T shape (Tau in Greek) from the Middle Ages.

History of the Palace of Tau

In the 15th century the Palace of Tau was extensively remodeled in a Gothic style, and in the 17th century, in a more classic style that gave it its current appearance. For a long period, the Palace served as the residence of the kings at their coronation (the Salle de Tau hosted the royal banquet at the end of the ceremony) before serving as a court during the Revolution. Property of the French State since 1905, it was badly damaged during World War I and was restored from 1950 onward to be converted into the Musée de l’Oeuvre de Notre Dame in 1972. This museum houses some of the tapestries and original statues from the church, as well as the cathedral’s treasure. 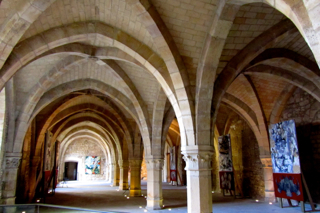 The Salle voûtée and Chapelle Basse (Vaulted Room and Lower Chapel) : The vaulted dining room shows the Martyrdom of the Cathedral by the architect Deneux, who undertook its restoration after damage caused by the First World War. The room leads to the Lower Chapel (13th century) via a 14th-century door surmounted by a beautiful tympanum depicting the Virgin and Child. The chapel contains fragments of the choir screen from the 15th century.

The Salle Basse (Lower Room) dates back to the 15th century. Note the beautiful architecture of the vaulted intersecting ribs. The remaining arches of an old Carolingian building (9th century) are visible on the north wall of the room. 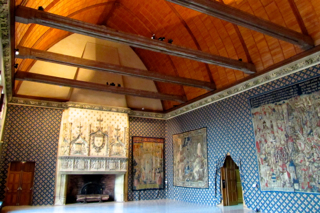 The Salle du Tau (Tau Room) is where the banquet was held after the coronation of the sovereign. Originally T-shaped, the now rectangular room houses beautiful tapestries depicting the life of Clovis (15th century).

The Trésor and the Chapelle Haute (Treasure and the Upper Chapel) : The cathedral treasure is exposed in two different rooms. It is composed of the reliquary of the Holy Ampulla, the chalice of the sacred (12th century), Charlemagne's talisman that is said to contain a thorn of the True Cross, and the Reliquary of Saint Ursula.

The Salle Charles X (Charles X Room) is dedicated to the last king to be crowned in the cathedral in 1825.

In the following parts visitors will notice the beautiful statues from the cathedral (13th and 14th centuries), including that of Goliath from the facade, that measures 5.40 meters, as well as embroidery, wall hangings and tapestries from the 16th and 17th centuries.

The Salle du Couronnement de la Vierge (Coronation of the Virgin Room) : The wall coverings depict the coronation ceremonies of the kings of France and their portraits.