Park and Gardens of Versailles

Park and Gardens of Versailles

The park of Versailles covers 800 hectares, consisting of the gardens of Versailles, the gardens of the Grand and Petit Trianon and Marie-Antoinette’s Estate. Beyond there, before the Revolution, lay the Great Park, over 8,000 hectares enclosed by a 43-kilometer wall, composed of forests and grasslands dedicated to hunting.

About the park and gardens of Versailles

The gardens of Versailles extend from the palace to the Apollo Fountain toward the west for 90 hectares. Beyond the parterres (flowerbeds and flat, rectangular pools), the gardens are organized around large straight paths plotted on a geometric plane crossing groves, fountains and pools. This French garden is decorated with nearly 400 works of art (more than 200 statues), making it the world’s largest museum of outdoor sculptures. The work on André Le Nôtre’s masterpiece lasted forty years, as many as for the construction of the palace, and mobilized 36,000 workers, which shows the importance of gardens in the eyes of Louis XIV. The site was run by Jean-Baptiste Colbert, superintendent of the royal buildings. The statues and fountains were designed by Charles Le Brun, first painter to the king. Thereafter, Hardouin-Mansart, the King's architect, continued the decoration of the garden in a more sober style and was responsible for the Orangerie.
The digging of the Grand Canal, irrigation systems and pipeline represented a technical test for Le Nôtre, who admirably rose to the challenge. The interplay of light created by the basins enhances the perspectives, even today. 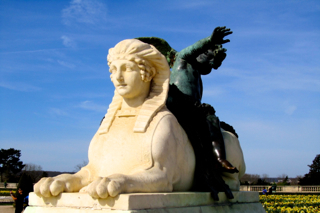 The sculptures are ubiquitous in the gardens. Marble, lead, or bronze, they are inspired by Greco-Roman mythology and history and cover many themes. The major rivers of France are represented in the work of the Water Parterre. The theme of the four seasons is represented six times in the guise of men and women. Note that winter is symbolized by an old man, the end of the year corresponding to the end of life. Over 300 sculptures adorn the gardens, works from artists such as Girardon, Tuby or Coysevox.

The many groves (small enclosed gardens with fountains and statues), also called open-air lounges, are truly unique plant compositions. Some had the favor of the King and the court as a place of entertainment (snacks, music and dance). Louis XIV especially loved to dance here.
Attention visitors : groves are only open during the water and light shows, on the weekends and on Tuesdays. 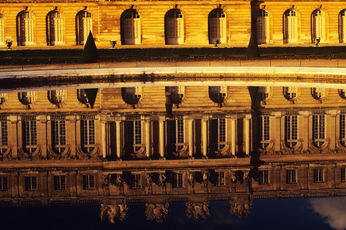 Water and the light it reflects was a great source of inspiration for André Le Nôtre. Important design element of French gardens, the water here evolves in all its forms : springing up, cascading down, used as a mirror to play with light and reflect its décor ... In the gardens, light and water are as important as the vegetable garden compositions, playing on contrasts between light and shadow, enhancing the ensemble.

Visit of the grounds around the Palace of Versailles 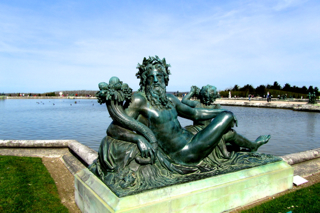 Located at the beginning of the tour of the gardens, at the foot of the palace, the Water Parterre reflects light of the two basins into the Hall of Mirrors This was the effect sought by André Le Nôtre: use the light reflected by the ponds to illuminate the façade and the rooms of the palace, and reflect the beautiful palace façade in the basins. The reclining statues that adorn the two basins are rivers of France (the Loire, Garonne, Rhône and Seine), four nymphs and four groups of children. After the Water Parterre, the two "fighting animal" fountains (1687) dominate the stairs that lead to the Latona Pool and Parterre. Six allegorical statues adorn the ensemble.

Between the Water Parterre and the Orangerie, visitors reach the ground floor of the Southern Parterre (or the Midi Parterre) by a flight of steps surrounded by two of the oldest sculptures in the park depicting Eros and the Sphinx (1668).

On the site of the old (and smaller) orangerie built by Louis Le Vau in 1663, Hardouin-Mansart completed an architectural masterpiece. The Orangerie is a collection of over 1,000 fruit trees that bloom majestically in the summertime. 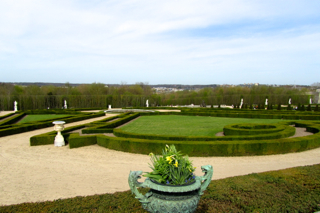 On the other side of the Water Parterre extends the Northerm Parterre. It is decorated with 18 finely crafted neoclassical sculptures evoking the myth of Apollo, and embellished by the Basins of the Crowns.

At the end of the Northern Parterre stands the Pyramid Fountain. At its base, four tritons support the first marble basin. They are topped by four younger tritons, four dolphins and finally the last lead bowl is supported by four crayfish. The jet of water comes out of a vase in the shape of satyr’s head. The fountain’s sculptor Girardon executed the work from a drawing by Charles Le Brun and took three years to complete.

Continuing towards the Neptune Fountain, the Nymph’s Bath represents water gods joined in the middle of a river among the reeds.

On the way to the Dragon Fountain, take the Water Path, lined with 22 groups of bronze baroque statues. 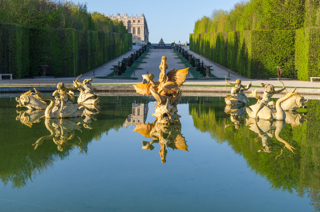 The Dragon Fountain depicts one of the episodes of the legend of Apollo: the Python snake killed by young Apollo’s arrow. The reptile is surrounded by dolphins and Cupids armed with bows and arrows riding on swans. The main water jet reaches at height of 27 meters and is the highest of the garden. 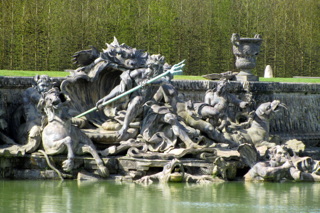 After the Dragon Fountain, visitors arrive at the Neptune Fountain, built under the direction of Le Nôtre. 60 years later, Jacques Ange Gabriel installed the sculptural decoration of the fountain: two dragons and sculptures of Neptune and Amphitrite. The new pool was opened by Louis XV, and was admired for its fountains : it has 99 jets, which compose an extraordinary aquatic spectacle.

Magnificent since its renovation! The Latona Fountain illustrates the legend of Apollo’s mother and Diana protecting her children against the insults of the peasants of Lycia, and calling on Jupiter to avenge them. He heard their plea and transformed them into frogs and lizards.  The central marble group sculpted by the Marsy brothers represents Latona and her children. The Latona fountain is prolonged by a parterre holding the two lizard pools.

Created under Louis XIII, the Royal Walk (or the Green Carpet) was renovated by Le Nôtre. 335 meters in length, it connects the Latona and Apollo Foutains, in line with the principal axis of the palace. The Royal Walk, decorated with a dozen statues, is one of the key elements of the garden. 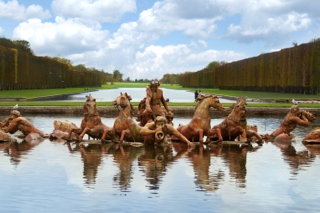 This pool, built in 1636 under Louis XIII, is topped by an impressive group of lead statues depicting Apollo, god of the Sun and emblem of Louis XIV, on his chariot pulled by four horses. This magnificent achievement by Tuby (1671), from a drawing by Le Brun, shows the solar myth of Apollo, and through this the splendor of the Sun King. The Apollo Fountain is a central element of this garden. The pool and fountain form a focal point in the gardens and serve as transitional element between the gardens of the Petit Parc and the Grand Canal.

The open-air Cascade Ballroom is also called the Rocaille Grove, because of the millstones and seashells brought back from the coasts of Africa and Madagascar, over which the water pours down in a cascade. A marble “island” in the centre (invisible today) was used for dancing.

Renovated in 1704, the Chestnuts Room is decorated with eight antique busts and two statues.

The King's Garden is an English garden whose vegetation was almost completely damaged after the 1999 storm (but was successfully recreated). 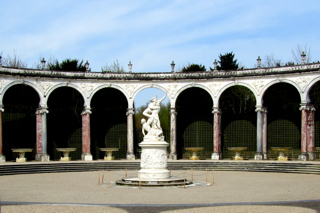 The Colonnade is the work of Jules Hardouin-Mansart. It is composed of 32 white and pink Ionic marble columns. A fountain sits under each arch, decorated with bas-reliefs depicting children musicians. The famous group in the centre on a circular marble base was executed between 1678 and 1699 by Girardon: Proserpine Ravished by Pluto.

The Grove of Domes, created by Le Nôtre in 1675, owes its name to the realization of two marble pavilions two years later, topped with domes by Hardouin-Mansart, though they were destroyed in 1820. Eight statues occupy the edges of the grove.

The Fountain of Enceladus (Marsy, 1677) depicts a giant half-buried under the rocks, fighting against death. Enceladus was the leader of the revolt of the Titans, crushed under rocks for trying to climb Mount Olympus without permission from Jupiter (it turned into a volcano). Out of his mouth sprays a 25-meter water jet.

Directed by Louis XIV and rebuilt several times, the Grove of Apollo’s Baths was redesigned by Jules Hardouin-Mansart to accommodate and enhance the "Horses of the Sun" (Guerin and Marsy brothers) and "Apollo Tended by the Nymphs" (Girardon and Regnaudin). At the end of the 18th century the grove was transformed to a more romantic, English style by Hubert Robert (1781), which contrasts with the other realizations of the garden.

At the end of the Apollo Fountain opens the 1,670 meter long Grand Canal. This original design by Le Nôtre enabled him to continue the great, luminous perspective that began at the foot of the palace. Taking around 12 years to finish, the Canal was quickly used for nautical entertainment. Expert in the field, the Republic of Venice sent two gondolas and four gondoliers (who were lodged on-site in the gardens) to the King of France. It was then called Little Venice.

The Swiss Ornamental Lake takes its name from the Swiss Guards who worked on its expansion from 1678 to 1682. This octagonal pond was also the scene of water festivals. This is the largest water reservoir in the park after the Grand Canal.