The largest gothic palace in the world, the Papal Palace embodies the power of the church in Europe during the 14th century.

History of the Pope's Palace

Following a dispute between the King of France (Philippe IV, called Philip the Fair) and the Pope at the time (Boniface VIII), the Archbishop of Bordeaux, Bertrand de Got was elected in 1305 to the throne of Saint Pierre under the name of Clement V. He decided to settle in Avignon in 1309. However, he lived there only intermittently. John XXII, who succeeded him, had the palace adapted to the requirements and needs of the papal court. It was thereafter that the amazing history of the palace truly began.

The ancient building was completely destroyed. Built in the same location in 1335, the palace that exists today is mainly the work of two popes, Benedict XII and his successor Clement VI. Benedict XII is responsible for the achievement of an austere, vast and powerful fortress. His successor, considering the first palace unworthy of the majesty of a papal palace, had a second, adjacent one built, called the "New Palace", which had elegant and richly decorated Gothic facades. He entrusted the work and interior decoration to Matteo Giovanetti and his team. The exceptional frescoes are still well preserved. After Clement VI, three popes succeeded in these walls (Innocent VI, Urban V and Gregory XI), each adding personal touches to the palace. The last, Gregory, had no other desire than to restore the seat of the Papacy in Rome, which he did in 1376.

At his death in 1378, the Roman population organized violent demonstrations forcing the Cardinals to elect an Italian pope, Urban VI. A few months later, the French cardinals declared the election null and chose Robert of Geneva, who took the name Clement VII. And thus began the Great Schism : Christianity was divided into two denominations. During this period (1378 to 1417), the two unofficial popes lived in the Palace, Clement VII and Benedict XIII, who finally left Avignon in 1403.

After the departure of the popes, Avignon remained the property of the Holy See and the Palace was the residence of the Italian legates until incorporation of the city to the country of France in 1791. The Papal Palace served as barracks until 1906 before being returned to the city. It was then protected and restored throughout the 20th century. 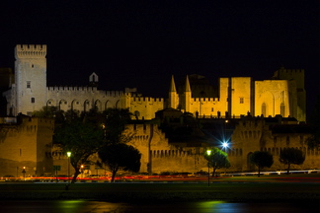 Visit with Histopad - New
Included in the entrance fee. Available in 7 languages.
The HistoPad (tactile tablet that is given to each visitor) allows a virtual tour of 9 main rooms of the palace that have been re-imagined thanks to augmented reality in their 14th century decorations.
The HistoPad is also a digital guide for an immersive tour, a geolocation all along the circuit and a fun and interactive treasure hunt for children.

The Court of Honor

Clement VI created this new site during the construction of the New Palace, and it would become the Court of Honor.
The Court of Honor is transformed into an open-air theater each year for the Avignon Festival.

The Consistory forms the ground floor in the east wing of the cloister. When in this room, the Pope wore special Consistory vestments. The room was used as a court and as courtroom. The Consistory was the bureau at which the Pope received and discussed the major affairs of the Church, whether clerical, theological, legal or political. The Consistory is also the place where the Pope received sovereigns, legates and ambassadors of all nations. Information about the construction site of the Palace is also presented during the visit.

The Chapelle Saint Jean
Set on the ground floor of the tower of the same name, the Saint John Chapel is completely painted with beautiful frescoes by Matteo Giovannetti.

The salle de Jésus
In continuation of the wing of the Consistory, the Jesus Room is named after the monogram adorning the walls, IHS, the Latin abbreviation of "Jesus Hominum Salvator," which can be translated as "Jesus, savior of Man ". It is here that the Cardinals waited for the Pope as he dressed in the vestibule. After the departure of the popes, the room was transformed into a dining room, and then became the Swiss Guard’s room and the antechamber of the apartments.

The  pontifical vestibule
On the second level of the Tour de l’Etude (Tower of Study). It is here that the Pope changed his vestments during ceremonies that took place in the Consistory. The woodwork dates back to the 18th century. Small library.

The Camerer's room
He is the man of confidence of the Pope, he is in charge of finance. Superb timber framing.

La Grande Trésorerie
As its name suggests (The Great Treasury), it was dedicated to financial services. Features a beautiful fireplace.

La salle du Trésor bas
The lower Treasury room features traps dug under the pavement that were used to hide valuables (gold jewelry and coins). This room was only accessible to the Pope, the camerer and the treasurer. 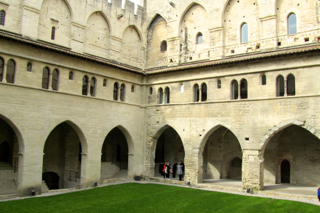 Cour du Palais Vieux or Cloître Benoît XII
The cloister consists of four buildings surrounding a courtyard. The arches supported by massive, bare pillars (the pillars are totally void of carvings) contribute a real serenity to the courtyard that opens onto a covered walkway. The style is characteristic of the sleek construction of the Vieux Palais (Old Palace). 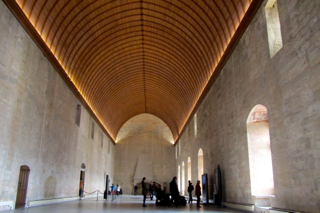 The Grand Tinel
The large hall of the Grand Tinel forms the floor above the Consistory, nearly 50 meters long. The term "tinel" means dining room, and this vast room hosted holiday banquets. The rest of the year, the Pope was served meals in the Petit (small) Tinel. The room let in a lot of light, highlighting its paneled vault draped in blue fabric wall coverings, studded with gold.. This sumptuous decor was destroyed by a fire, as well as the frescoes adorning the walls. At the back to the left, the kitchen features a huge hood. This room was dedicated to cooking dishes.

The story ... of banquets
To conceal the preparations for banquets from the guests, a wall was constructed to obstruct the view; the supports of the four gates are still visible in the wall where the fireplace stands. This space, called the Dressoir, connects to the kitchen. Servants used the room to keep dishes warm by the fireplace before serving. The master of ceremony, the butler and the other servants stood there during meals, ready to intervene, as well as the carver who was busy cutting food.
Banquets were arranged according to a strict protocol that governed the placement of the guests or the nature of the food, according to calendar of abstinence days (no meat) or feast days. An officer took the role of master of ceremony and ensured that the guests were placed more or less close to the Pope, according to their importance. The Papal table, where the Pope ate alone, was installed on a platform along the wall opposite the Dressoir. The guests sat along the walls on wooden benches, the Cardinals on the east side of the room, the other guests on the west side. The tables formed a U and the service was administered through the center of the room.

In the Tour Saint Jean (Saint John Tower), near the Grand Tinel, stands the beautiful Chapelle Saint Martial, which also includes works by Matteo Giovanetti. These works depict 35 episodes in the life of Saint Martial.

The chambre de parement
In the extension of the Grand Tinel. The Chambre de Parement is the antechamber of the bedroom of the Pope. The word “parement” signifies the set of tapestries that decorate the walls and seats. On the east wall overlooking the Benedict XII garden, remnants of the marble decorations make it possible to imagine the rich wall decor of this room. This room has been changed many times over the centuries, as evidenced by the visible marks on the walls. The Pope and the cardinals held secret meetings here. Important guests were also received here.

The chambre du Pape
The Pope’s Chamber is located in the heart of the Tour des Anges (Tower of Angels). This room is divided by movable partitions. There may have also been special hearings given here. The furniture dates back to the late 14th and 16th centuries, and did not come from the Palace. On the walls, on a blue background, intertwine vine foliage and oak branches, with frolicking birds and squirrels. It may have been between 1336 and 1337 that these decorations were executed, but the dates and attribution of these paintings remains controversial. This room also features beautiful floor tiles.

The chambre du Cerf
The Deer Room is located at the junction of the Old Palace and the New Palace. It was the workroom (studium) of Pope Clement VI. He installed a bed and his personal library. It derives its name from the scene of deer that adorned the walls, but has almost disappeared. The ceiling (original) is richly decorated. Below, two friezes sit above the beautifully preserved frescoes depicting the manorial pleasures of hunting and fishing. As in the Pope’s Chamber, the rich tile flooring is a reproduction made from soil found in the Studium of the Tour de l’Etude (Tower of Study).

It was here that the Pope changed clothes during the ceremonies that took place in the Grande Chapelle.

The Grande Chapelle
Dedicated to the apostles Peter and Paul, the Great Chapel was built by Clement VI's architect Jean de Louvre. The nave is 52 meters long, 15 meters wide and 20 meters high. During its construction the walls were not painted. During the 16th and 17th centuries the legates had the arms of reigning popes painted, visible on the east and west walls. Pontifical ceremonies were celebrated in this chapel. Among the most lavish ceremonies, the papal coronation was of an exceptional magnificence.

The Sacristie Sud or Revestiaire des Cardinaux
From the Great Chapel, one reaches the South Sacristy or the Cardinals’ Vestibule, located in the Tour Saint Laurent (Saint Laurent Tower). In the 14th century, the Cardinals’ Vestibule served as the sacristy during the papal ceremonies, where the cardinals put on their robes. Paintings of reeds and wrens adorn the window. This room is vaulted with intersecting ribs. One of the keystones bears the arms of Innocent VI. The casts are the effigies of Popes Clement V, Clement VI, Innocent VI and Urban V, none of them having been buried in the Palace.

The chambre des notaires
The Notary Room houses portraits of the nine popes of Avignon.
Visitors can take a break from the tour to climb to the Terrasses des Grands Dignitaires to enjoy the view while drinking coffee or having a snack (from April through October). The top of the Tour d’Angle features a wonderful view of the surrounding countryside and the city. 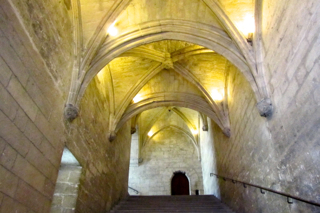 The Escalier d'Honneur
In 1346, construction began on the Grand Staircase of Honor serving the Great Chapel from the Court of Honor. The staircase is wide and flanked by rooms that serve as guard posts.

Back on the Ground Floor 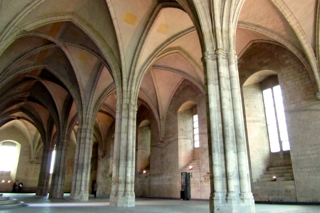 The Grande Audience
The Great Audience Room has the same dimensions as the Great Chapel, below which it is located. Its proportions are remarkable, though it is "only" 11 meters high. It is separated into two aisles by five pillars that support the ribs. At the wall, the ribs rest on beautifully carved bases representing animals. This room welcomed the Tribunal Causes Apostolique, a permanent judicial body (without possibility of appeal), organized in a panel of jurors. The vault in the east bay was decorated by Matteo Giovannetti in images representing the 18 prophets of the Old Testament.

The tour ends with a visit of the boutique, located in a beautiful vaulted room with a central pillar. Visitors return to the Place du Palais by a charming alley carved in stone.