Unlike most Roman theaters, this one was not built into a hill, but built entirely on its summit. Though today the theater is much less well preserved than the neighboring amphitheater, it retains an undeniable charm. 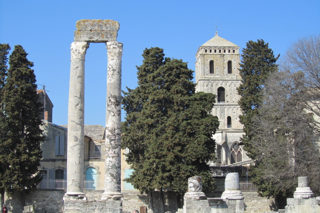 The Roman Theater is located between the amphitheater and the Jardin d’Eté (summer garden). In the late 40s BC, shortly after the founding of the Roman colony, a monumental program was initiated for the development of large public spaces and the construction of three major buildings: the forum, the arc of the Rhône and theater. The theater was completed around the year 12 BC. It served as the stage for many shows, tragedies, comedies, mime shows, which the public attended for free.

Fortified in the Middle Ages, it was used as a quarry and then completely covered with houses. The Roman Theater of Arles is 102 meters in diameter. Its outer wall was composed of three floors of 27 arches supported on pillars. It could accommodate 10,000 spectators spread over 33 stands. Only a few elements remain: some steps, the orchestra, the stage curtain pit and two high marble columns. The pulpitum wall separated the orchestra and the stage. It was adorned with decorated niches, including the altar of Apollo, found in 1828. The stage wall consisted of three rows of columns and numerous statues, including that of the Emperor Augustus that now resides in the Museum of Ancient Arles. The famous statue "Venus of Arles" is housed at the Louvre. The Royal Door stood in the middle of the wall, and was bordered on each side by columns, still visible today. Like for the amphitheater, it was cleared of the buildings that occupied the site in the 19th century.