Begun in 1282 on the highest points of the city, its construction lasted over 200 years. It is the largest brick cathedral in the world, with extraordinary dimensions: 113 meters long, 35 meters wide, with a vaulted ceiling 30 meters high and a bell tower which rises to a height of 78 meters.

The cathedral imposes its power in the typical South Gothic architectural style that permeated the southwest regions of France at the time. The cathedral was dedicated to Saint Cécile, Roman martyr of the 5th century.

It was Bernard de Castanet, inquisitor of Languedoc, who initiated its construction. Its austere style, remnant of its defensive role, expresses the power over the Cathars. His successors, the Bishop-Lords Louis I and Louis II d'Amboise, completed the construction in a late Gothic style, and as such added their own rich and detailed decoration. The canopied outer entrance, the choir, the statuary and the many interior murals all offer proof that the cathedral is truly a true masterpiece of Southern Gothic architecture. 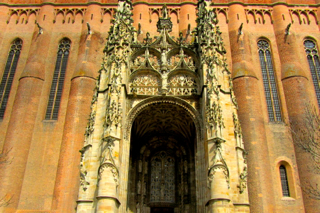 The canopy (1519-1535)
Past the “Dominique de Florence” door at the top of the grand staircase stands the canopy, entrance to the cathedral porch, which marks the transition from the profane world to the world of the sacred. It provides access to a richly decorated doorway and a hall covered with a beautiful arch, made ​​just before the canopy. 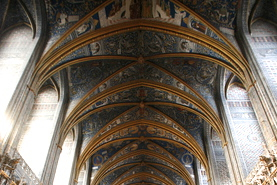 A unique nave and buttress
Typical of Southern Gothic architecture, Saint Cécile is organized around one structural element that governs all others: the nave. This relatively simple style contrasts with the exuberance of the French architecture that prevailed at the same time, as seen in the styles of the cathedrals in northern France (in Chartres, Reims and Amiens), also classified as World Heritage sites.

The vaulted ceiling (1509-1512)
In a Renaissance style, the paintings on the vaulted ceiling retrace the history of Salvation. The main arch combines images from the Old and New Testaments on a blue background. This monumental work, the labor of Italian artists, represents the largest collection of Renaissance paintings realized in France, an absolute masterpiece of monumental painting. 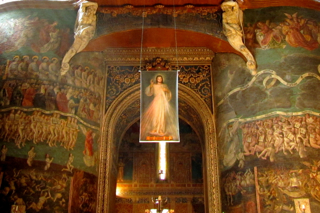 The Last Judgment (1474-1484)
Louis d'Amboise commissioned a project to cover the interior walls of the Saint Cécile Cathedral with a new painted mural of over 200 square meters. The theme referenced the Last Judgment, and is today the oldest and the largest scene ever painted. It is located under the great organ (to the left as you enter). In the images, angels sound the trumpet announcing the Resurrection and the Judgment. The dead rise from their graves. Around their necks, the characters carry a book of their deeds, good or bad, on which they will be judged. Hell, easy to recognize by the images of monsters and chaos, is shown at the bottom of the mural and illustrated by seven sections, each representing one of the capital sins. 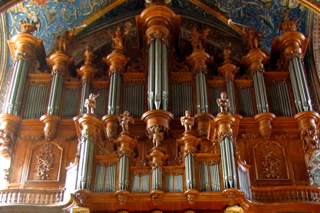 The organ, an architectural and musical masterpiece (1734-1736)
Once again, excessive size characterizes the cathedral. The monumental organ is exceptional for its oversized dimensions (the biggest classical organ in France) and decorations of musical cherubs (the work of Christophe Mouchere). Thereafter, the organ was overhauled.
Free concerts are scheduled on Wednesdays at 5 p.m. and Sundays 6 p.m. in July and August. 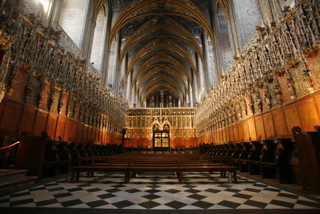 The choir and the gallery (1474-1484)
Audio guide (in 11 languages) is available for the visit of the choir and the gallery.
Saint Cécile is the only cathedral in France to retain its full choir. It is separated from the nave by a rood screen that consists of 87 statues. With its many statues (figures of the Church), the exterior of the choir evokes the Old Testament, while the interior features themes based on the New Testament. The apostles, the Virgin Mary, Saint John the Baptist, Saint Paul and countless statues of angels adorn this structure. The figures of Charlemagne and the Emperor Constantine enclose both doorways of the rood screen.

The statuary of the choir
The statues of the church are made of white stone with great attention to detail. It originally included 280 statues, a considerable number for its time.

The treasure  trove
Accessible via a small spiral staircase.
Hidden in the heart of a magnificent chapel (dating from 13th century), the treasure trove consists of liturgical and sacred objects of high quality and value and its jewel: the Mappa Mundi. Albi’s Mappa Mundi is one of the two oldest known representations of the world as it was perceived in the eighth century (the other one is owned by the Vatican). This unique medieval map is registered in the UNESCO Memory of the World Programme.
This map, drawn in the middle of the 8th century, was used as an educational document in the Bishops’ library and as a model for the Albi scriptorium. It represents the world in the form of a horseshoe. Based on the representation of space in the Antiquity and updated with Christian elements, it presents a world centred around the Mediterranean Sea, orientated to the East and featuring around fifty names of cities, regions, rivers, seas and winds.