To discover on foot.

The Saint Michel district has long lived along the river. Its small artisans (carpenters, coopers, blacksmiths and gunsmiths) earned their living from the passage of barges (flat-bottomed boats) loaded with raw material cargo from the confluence of the Garonne River (from Quercy, Rouergue, Gascogne). The Saint Michel Basilica, in its Gothic style, is at the heart of this lively working-class district.

Market held on Monday and Saturday mornings by the church. Flea market on Sundays. 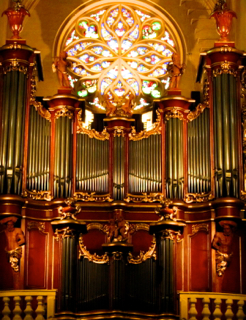 The Saint-Jacques chapel has a wooden altarpiece from the 17th century decorated with a painting of "The Apotheosis of Saint-Jacques" (1632). The chapel, dedicated to the pilgrims, houses the tomb of one of these travelers called "jaquets", as well as a pieta dating back from the late 15th century and the Louis XV organ buffet dating back to 1774. 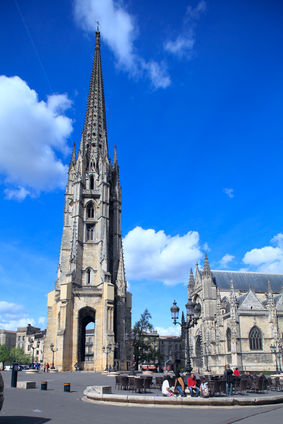 The bell tower of the Saint Michel Basilica was built between 1472 and 1492 and rises 114 meters toward the sky, one of the highest in the country. Visitors can enjoy a panoramic view of the surroundings from the tower. Discover the history of the district, the spire and the church, and listen to a concert of its 22 chimes. Reservations are required to visit the tour, available at the Tourist Office. Not recommended for young children.

The story ... of mummies
In 1791 the old cemetery surrounding the church was removed, and became the current Place Meynard. The bones were stacked in the crypt beneath the bell tower and covered with earth. Dozens of bodies were then exhumed, placed in a circle in the crypt, and because they were so well conserved by the clay soil, the display quickly turned into a sort of museum. The mummies, inspiring many legends, attracted curious onlookers, and sometimes famous ones. Victor Hugo visited the crypt in 1843, followed by Théophile Gautier a few years later. The crypt was closed in 1979 and the mummies were buried, this time in the cemetery of the monastery.

Porte de Bourgogne (1756)
Place Bir Hakeim, 33000 Bordeaux
The gate of Burgundy, formerly known as the gate of the « salt workers », was designed by Intendant Tourny and built by the architects Ange-Jacques Gabriel and Nicolas Portier in tribute to the Duke of Burgundy.  Its classical design with its Doric columns is similar to that of the triumphal arches. The name "Salt Workers » comes from the salt used at the time by the merchants of the district.
For a very long time, the stone bridge was the only way to cross the Garonne, the Burgundy gate was one of the main entrances to enter Bordeaux when coming from the right bank. 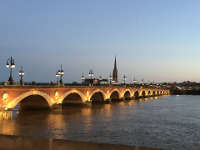 Pont de Pierre (1822)
The stone bridge, built on the orders of Napoleon I, is the first bridge built in town, unified the two banks of the Garonne into a single city, solving the thorny problem of crossing the Garonne. 4,000 workers worked there. The Compagnie du pont de pierre was created to finance the work, the shareholders having to be reimbursed by a toll.
The stone bridge is 486 metres long and has 17 arches. The pillars and arches are made of ashlar, the vaults of stone and brick. The enormous mass is lightened by a network of internal galleries. It was opened to traffic in 1822.
The bridge was permanently closed to traffic in July 2018. It is now reserved for pedestrians, cyclists and public transport.

Further south along the quays, the Sainte Croix District

Dominated by the high tower of the Romanesque abbey, Church of Sainte Croix (12th century), the area was included in the walled enclosure at the beginning of the 14th century. This working class district was home to ropers, cobblers and potters. From the 17th century onward the development of trade with the West Indies favored the installation of sugar refineries in the area.

Attached to the church of Saint Eloi, the gate served as a belfry for the former City Hall. The two towers of Saint Eloi, nicknamed the Big Bell, rise 40 meters high. Pilgrims following the Pilgrimage Route of Santiago de Compostela passed under the Porte de la Grosse Cloche. Many changes were made over the centuries following its creation. The leopard appearing above the door recalls the arms of the English Guyenne of which Bordeaux was the capital. The current bell was cast in 1775, weighs 7,800 kilograms and is two meters in height and diameter. Recently restored, the bell is beautifully lit in the evening. 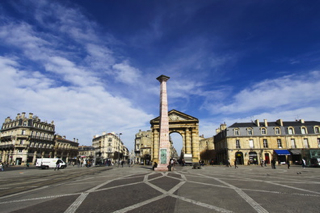 A popular area for having a drink, watching a show or concert or hunting for rare finds during one of the many thematic markets. 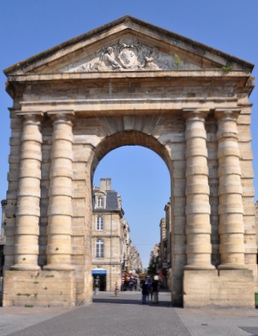 One of the eight entrances to the city sits at the center of the Place de la Victoire. Its name was given in memory of the Duke of Aquitaine. Imposing, in a triumphal arch 32 meters wide, the Porte d’Aquitaine is topped by a triangular pediment (attic) decorated with sculptures of sea gods and the royal coat of arms on the side of the square, and fruits and flowers on the side of Rue Sainte Catherine.

To the west of the Sainte Croix district, this area was built around the parish church of Sainte Eulalia, which was the starting point of Pilgrimage Route of Santiago de Compostel. Religious architecture has marked the history of this area, rich with architectural remains. It included many convents with cloisters and gardens, reflecting the splendor of the era. Today the convents Annonciade and Notre Dame still exist. The area was mostly populated by craftsmen (masons, tanners, oil merchants and carpenters). Strolling through the picturesque streets of the district allows visitors benefit from its historic significance and beauty.