The old cathedral is unique in its Romanesque and Gothic styles that overlap and mingle on stained glass, sculptures and in the decorations of the church. The result is as surprising as it is beautiful. The other invaluable worth of the church comes from its exceptional and beautifully preserved stained glass. 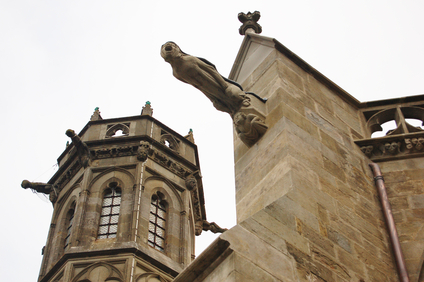 A Romanesque 10th-century church, it was consecrated cathedral by the Pope in 1096. The building was completed in the 12th century with the addition of the current six-bay Romanesque nave, then enlarged in the 13th century in a Gothic style. The many stained glass windows depict scenes from the life of Christ and the apostles. Those of the bays of the apse and transept, completed from the 14th to the 16th centuries, are exceptional. The stained glass windows are best admired in the morning or evening to take advantage of the light. 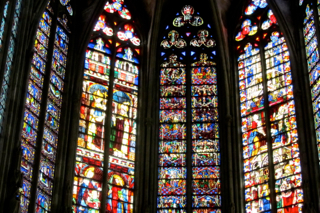 Gothic chevet (1270-1320)
The original Romanesque choir was replaced by an exceptional, imposing structure in a Rayonnant Gothic style. It is composed of 22 windows with two large rosettes. Scenes from the Life of Christ preside in the apse. The rosettes with geometric patterns are dedicated to the Virgin Mary and Christ. These windows are without a doubt among the most beautiful in southern France.

The church lost its status as a cathedral in 1801 in favor of the Saint-Michel Church, located in the Bastide Saint Louis. It became a basilica in 1898.

The restoration work (1844-1864)
Viollet-le-Duc’s restoration work reflected the beauty of the building. He surrounded himself with a team of masons, sculptors and master glass makers to rebuild the Romanesque doorway and renovate the windows, the pillars of the nave, the buttresses, the masonry of the choir, as well as the gargoyles and cornices adorning the upper parts of the church.

The tomb of Guillaume Radulphe
Access on the other side of the cathedral, currently closed for renovation.
This funeral chapel was built from 1259 onward on the south side of the cathedral by Bishop Guillaume Radulphe. The building was the first example of Rayonnant Gothic architecture in Languedoc. The tomb of the bishop is dominated by the figure of the prelate (religious dignitary) on the west wall. The decorated cistern is dedicated to funerals. The soul of the bishop is represented by a small child with two angels ascending to heaven.