This is the location of the ancient port of Burdigala. Pierre, the patron saint of sailors, was honored by the entire city.

In the 12th century, the docks were moved further south. The district would resume life in the 18th century thanks to Intendents Boucher and Tourny (local administrative officials), who were awarded the honor and the burden of its redesign. They opened the area to the outside by removing the walls, landscaped the Place de la Bourse and created the Place du Marché Royal (Place du Parlement). The façades of the houses are richly decorated with masks, molding, stone balconies and wrought iron. See also "Place Saint Pierre."

Originally called Place Royale, it is the symbol of the prosperity of the city. The Place de la Bourse faces the waterfront overlooking the Garonne. A model of classic architectural art of the 18th century, it owes its beauty to the Intendent Boucher and royal architect Jacques Ange Gabriel, who tore the medieval walls down between 1730 and 1775 to open the city to the river.

To the north stood the Palais de la Bourse (now the Chamber of Commerce and Industry) and the Hôtel des Fermes (now Directorate of Customs) to the south, which houses the National Museum of Customs. Opened in 1984, this museum presents the history of the Customs Administration (see "Museums"). The architecture of the Place Royale influenced that of the houses on the quays. The renovated stone façades reveal a sumptuous décor of pediments and masks representing of course, Bacchus (god of wine) but also female faces, angels, and fantastic animals.

An equestrian statue of Louis XV reigned over the square until the Revolution (during which it was destroyed). Today you can see the Three Graces Fountain designed by Luis Visconti in 1869 that represents the daughters of Zeus (Aglaia, Euphrosyne and Thalia).

Recently the quays have been transformed into a promenade. The homogeneous alignment and beauty of the façades stretches for over a mile, and are reflected in the Miroir d’Eau, a permanent pool featuring beautiful lights in the evening. 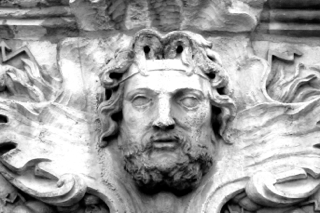 At its creation in 1760 the square was called Place du Marché Royal, with the intention of linking the port to the city. The current name of the square honors the powerful parliament of Bordeaux established from 1462 to 1790. It is a masterpiece of architectural harmony. The buildings that line the square date back to the early 17th century. As in many places, the building façades in Louis XV style are richly decorated with masks, wrought iron balconies and arches. The fountain in the square was added in 1865.

This charming square was the entrance to the harbor in ancient times. In 1832, a statue of Hercules dating from the 3rd century (that certainly adorned the entrance) was found under the square. This archaeological find is one of the most beautiful pieces in the Musee d'Aquitaine. The square is organized around a 14th century church. Restored and modified in the 19th century, it nevertheless retains the south and west doors and the Gothic choir dating from the 15th century. See also "Saint Pierre District."

Not recommended for young children. Main entrance to the city, it was constructed in a military style in honor of King Charles VIII, victor of the battle of Fornovo (Italy). His statue stands on the side facing the river. The emergence of the Renaissance era influenced its architecture and offers unexpected decorations. From its 35-meter height visitors can enjoy a beautiful view over the city, the river and the Stone Bridge (1822), the first bridge of Bordeaux.

Rue Sainte Catherine
It is one of the oldest streets in the city. 1200 meters long, it is THE essential street in Bordeaux if you want to do shopping! Entirely pedestrian, it cuts the city centre along a North-South axis by connecting the Place de la Comédie, where the Grand Théâtre is located, to the Place de la Victoire.