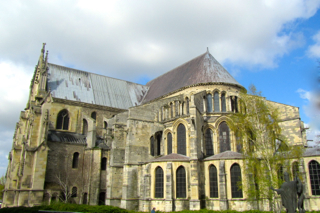 Basilique Saint Rémi
Place du Chanoine Ladame, 51100 Reims
Website
Free admission.
Open daily: 9 a.m. to 7 p.m.
A 20-minute walk from the Cathedral, or by using the electirc shuttle (see "getting around").
Audio-guided tours and guided tours possible, contact the Tourist Office for more information. Accessible to those with reduced mobility.

History of the Saint Rémi basilica

In the 8th century the Abbey of Saint Rémi was founded in Reims, and its community of Benedictine nuns would remain in place until the French Revolution. The abbey was consecrated by Pope Leo IX in 1049. Today it retains its simple nave, transept and the south tower from the Romanesque period (11th century) and its Gothic choir (12th century). Rebuilt in the following centuries, at 126 meters long it is almost the size of the Cathedral.
And like the Cathedral, the Basilica suffered from bombing during World War I. Partially collapsed, it would take nearly 40 years of work under the direction of architect Henri Deneux to restore its splendor. In 2000, a new organ replaced the one destroyed in 1918. 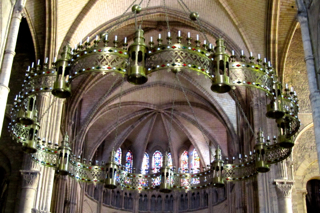 With its architectural harmony and lightness, it remains one of the finest achievements of Romanesque art in the north of France. The large chandelier and its 96 candles pay homage to Saint Rémi, who died at the age of 96. The Basilica also features beautiful stained glass windows from the 13th century depicting the Crucifixion.