The Place d'Armes and the Grand and Lesser Stables are included in the World Heritage site because they were a part of daily life for the palace and the King.

Visitors access the palace after crossing the Place d'Armes. Its semicircular shape converges the streets and paths from the town toward the palace. On the other side of the square, the two symmetrical buildings of the Royal Stables close the huge esplanade. This ensemble, executed by Hardouin-Mansart in 1682, is composed of the Grand and Lesser Stables, where more than 1,000 people worked under Louis XIV. 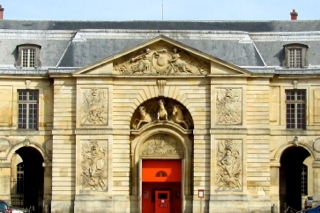 Led by the Grand Squire of France, the Grand Stable was reserved for members of military nobility. Pages, young men working in the service of His Majesty, were trained here to become officers of the army. Teaching was very thorough (riding, arts, fencing) in this elite school. It also housed the King's horses, riding rings for training ... Today its equestrian tradition is still honored. The Academy of Equestrian Arts and the Gallery of the Coaches have each taken up residence here (see below "L'Académie du spectacle équestre”) 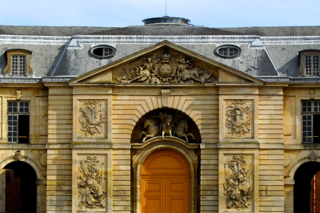 The Petite Écurie (closed to visitors).

A meeting is proposed to discover the work of the Academy: