The Place de la République is the center of the city of Arles. The several buildings that surround it can, alone, retrace the history of the city. The cryptoportiques located under the square date back to antiquity, just like the obelisk at the center of the square. There are also the church and the cloister of Saint Trophime from the 12th century. The Hôtel de Ville was built in the 17th century. 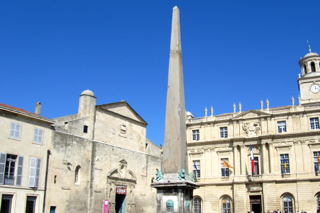 Solar and imperial symbol in Antiquity, the obelisk is made of granite. It measures, with its pedestal, twenty meters. The obelisk comes from the spina (central wall around which the track runs) of the Roman circus. It was installed in the 4th century. Just like the circus, the obelisk was abandoned from the 6th century onward, and collapsed. At its rediscovery it was placed on the Place Royale, in front of the new city hall, which the consuls chose to erect "for the greatest glory of Louis XIV." The royal symbol, a bronze globe surmounted by a sun, was added. Other changes were made over the course of the following centuries. 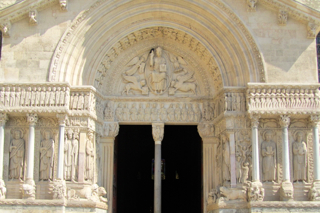 Most of the church that stands today dates from the 12th century, and it remains one of the major examples of Romanesque art in Provence. The front of the church, originally sober, was adorned with a doorway in 1180, a true masterpiece kept in exceptional condition. The doorway takes the form of a triumphal arch. It is undoubtedly one of the most beautiful Romanesque doorways in France. Its decor, exceptionally rich, represents the Last Judgment with a symbol of Christ surrounded by the four evangelists at the center of the tympanum. Among the statues of Saints, the third from the left is Saint Trophime. Three major topics are covered on the portal: the assembly of the patron saints, the divine and human epics, and the original sin and its future fate for the elected and the damned. The composition culminates with the solemn and triumphant image of Christ. Inside, the Gothic choir replaced the Romanesque apses in the 15th century. 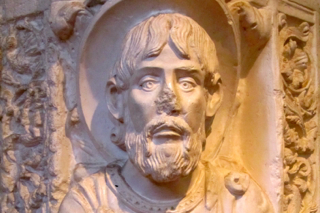 The Saint Trophime cloister is at the center of the canonical buildings of the Episcopal city. It was added to the complex in the 12th century. The first two Romanesque galleries feature carvings of exceptional quality, real jewels of the Romanesque art in Provence. The building would be completed in the 14th century by two Gothic galleries. The center of the Saint Trophime cloister consists of an old cemetery, which later became a garden. And thus the construction of the cloister completed the rebuilding of the cathedral complex.

The structure of the cloister and its rooms

The canonical buildings are composed of a vast refectory located along the cathedral, a chapter room hidden behind its magnificent facade and an arched dormitory, which forms the third side. The canons then undertook the connection of these buildings with the galleries of the cloister. 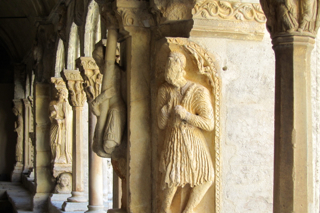 The décor of the Romanesque galleries (north and east) is extremely rich. Two themes are reflected in the north gallery: the Paschal mystery and the elation of the patron saints of the church of Arles. Along the gallery, the evocation of the Passion is depicted on the pillars, and the capitals recite of the life of Christ. On the intermediate and corner pillars, the exquisite statues also recount the life of Christ, the great Saints of the Church and the local patrons saints, in particular Saint Trophime. The capital iconography unfolds around the themes of the Old and New Testament. 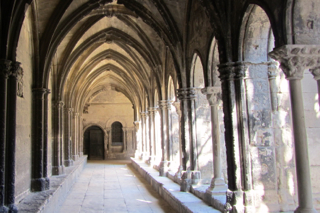 The last two galleries (south and west), vaulted on intersecting ribs, were not constructed until the late 14th century. The sculptural decoration of the capitals illustrates the life of Saint Trophime. The iconography of the west gallery is less consistent than in other galleries. Biblical passages mingle with more local Arlesian themes. 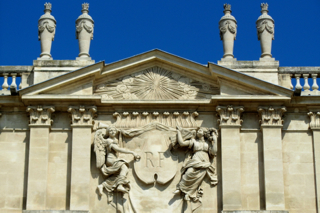 With its beautiful classical architecture, the Hôtel de Ville (city hall) benefitted from a particularly prosperous and opulent period of history of the city. Built in 1676 in the heart of the city as a symbol of power and splendor, the Hôtel de Ville completes the magisterial view of the Place de la République. Three levels high, the first floor has an imposing central setting where double columns frame glass door that opens onto a balcony. The second floor is dominated by a central pediment, which features the image of a sun, symbol of Louis XIV. 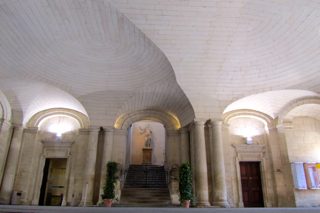 The building is particularly remarkable for the richness of its decoration and the arch cradles of the hall, a significant technical challenge at the time. It is open to the public during the day. The cryptoportiques are also accessible from inside. 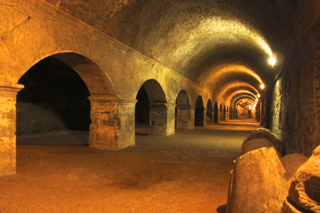 The cryptoportiques served as a large basement supporting the floor slabs of the forum, the central public square of the city during antiquity. Because of its many transformations, the history of the monument has long remained an enigma.

The galleries are presented in a U shape. The north and south galleries measure 90 meters long ; the connecting west gallery measures 60 meters long. Their width is almost 10 meters. Each branch is made up of a double-arched gallery, falling on a series of arches that rest on pillars. This structure represents an admirable work. The galleries were lit and ventilated.

Visitors can see the prison cells by the vents. They were only accessible by two service entrances, and only municipal employees had access. In the early 5th century, the cryptoportiques were partitioned to serve as individual cellars. Access to the cryptoportiques, which had been looted and parceled, would be completely closed in the 10th century.