The Lower Town of Provins

The village is organized with the Place du Châtel at its center. Around the old market square, houses were developed for the fairs, each having a system of vaults, built between the 12th and 14th century. These could be either completely underground (like in the Upper Town) or partially built above ground (like in the Lower Town), though all opened onto the street.

It was in front of this church, built in the 11th century and dedicated to Saint Ayoul, that stood the first trade fairs of Provins. It was later extensively remodeled over the centuries. The building features a beautiful bronze door and statues designed by the architect Georges Jeanclos.

Near the church of Saint Ayoul stands this bell tower, the sole remains of a church and a monastery destroyed during the Revolution. 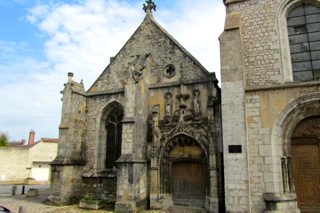 This church owes its name to a piece of the true cross of Christ brought back from the Crusades by Thibaud V. Burned in 1305, it was largely rebuilt in the 16th and 17th centuries, hence its beautiful Renaissance portal.

Rue Saint Thibault
Lined with mansions, it connects the Lower Town and the Upper Town.

Hotel du Vauluisant (13th century)
The old baths have now become a hotel, "La Demeure des Vieux Bains", see "Sleeping and Eating." Built in stone in the 13th century, it was an important place in Provins where visitors benefitted from curative baths. 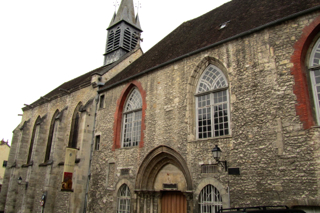 Provins is run through by a large network of underground tunnels whose origin is unknown, though several functions are assumed. It is very likely that they were used as a quarry for extracting Fuller's Earth (clay soil), which was used for the cleaning and degreasing of sheep wool used for making sheets, Provins’ specialty in the Middle Ages.

Thereafter, these galleries were converted into low vaulted rooms to accommodate the stocks of merchant goods at the Champagne fairs, and served as warehouses. Some, decorated and well-lit, presented the goods to potential buyers as kind of "show-room". This type of room is the most common, and visitors will find a good example at the Grange aux Dîmes (Tithing Barn). And the underground tunnels were certainly used as meeting place for cultural and clandestine meetings, including Freemasonry. Traces of this usage can be found on the walls of the underground in the form of dated graffiti or esoteric drawings. This underground network also allowed inhabitants to escape the walled city discreetly in case of siege.

The vast majority of the 9 kilometers of galleries are located under private properties, and are not open to visits. Only 250 meters from the public domain are revealed during the guided tour. Visitors will discover a low vaulted room beneath the Hôtel-Dieu. It was used primarily for hospitality ; poor pilgrims and beggars were welcomed there. The architecture and decoration of this room is more sober. The recent illuminations highlight the artistry of the structure. Another low vaulted room had the same function, the vault of the Holy Spirit, built in the 12th century (not open for visits).

The majority of houses in Provins have these beautiful vaulted spaces. More than a hundred have been identified in the Upper City and dozens more in the Lower City. 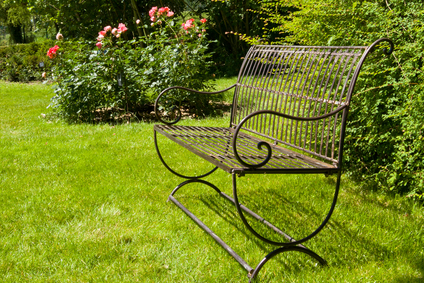 This garden presents the history of the rose through more than 300 varieties of the flower, organized by theme in a large garden, a haven of peace. You will discover the Damascus rose brought back from the Crusades by Thibaud IV of Champagne in 1240, which became the Provins rose. Grafted and spread, this rose would become the ancestor of all varieties of roses grown in France. It was given to distinguished visitors, kings and queens, and became one of the symbols of the city, now part of its historical – and medical ! – heritage. Features a garden labyrinth for children.

The Couvent des Cordelières
View from the Rue Saint Thibault. Located outside the city walls, this convent was founded in the 13th century by Thibaud IV. It later served as a hospital.