The lower town of Carcassonne

Located at the foot of the City, between the Canal du Midi and the Medieval City, the lower city is not part of the area classified as a World Heritage site, but this does not mean that it is of little interest. On the contrary, it presents a remarkable architectural richness, both in terms of private mansions and religious heritage. The following are some attractions that will allow visitors to deepen their knowledge of the city.

The city was built on a grid around a central square, actually square Carnot, flanked by strongholds at each corner and two churches. The wall was completed in 1359. It presents an interesting architectural richness for private mansions and religious heritage. Audio tours of the Bastide are organized by the Tourist Office. 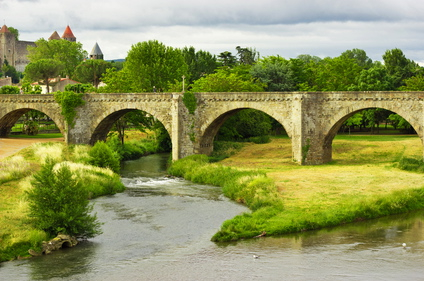 The old stone bridge consists of 12 arches that date back to 1320. Until the XIXth century, it is the only link between the Bastide Saint Louis and the Medieval City. Exclusively reserved for pedestrians, it allows quick access to the Medieval City.

The Cathedral is a 13th century Gothic-Languedoc church. It became a cathedral in 1803 and was restored by Viollet le Duc after the fire of 1849.
The plan of the cathedral is characterized by relative simplicity. It forms a single nave bordered by several lateral chapels. The choir conserves stained glass windows from the 14th century.

The Garden of the Calvary was founded in 1825 under the reign of Charles X. A little haven of peace located near the Saint Michel Cathedral. 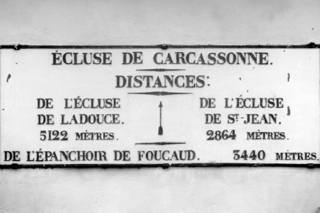 The Canal du Midi
Classified on the World Heritage list of Unesco. The site is covered in its own section.