The Palace of Fontainebleau

The Palace of Fontainebleau is unique. The events that took place there, the construction of its buildings, the decoration of its apartments and its furniture are all valuable testimonies of eight centuries of French history. Visits of the Palace, its apartments, its courtyards and its gardens brim with architectural and artistic history.

About the Palace of Fontainebleau 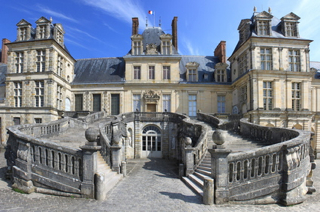 Visit of the Grands Appartements and Napoleon I Museum
Full price / reduced price: €12 / €10. Free for EU citizens under 26 years old and for non-EU citizens under 18 years old.
The most interesting way to visit the Palace.
Audio guide in 11 languages included.
Visioguide rental (11 languages): €4. The visioguide offers an audio tour, enriched with visuals and additional comments on the rooms and works.

Visit of the musée chinois de l’Impératrice (the Chinese Museum)
Price: €3 / free for children- 12 years old, in addition to the admission fee including the HistoPad, from 12 years old.
HistoPad available in 12 languages.

Visitor Tips
An hour before closing, unique price : €8.
Free general admission the first Sunday of each month (except in July and August).

Opening Time of the Palace of Fontainebleau

The courtyards and gardens
Open daily. November through February: 9 a.m. to 5 p.m. ; March, April and October: 9 a.m. to 6 p.m. From May through September: 9 a.m. to 7 p.m. The Jardin de Diane and the Jardin Anglais close 30 minutes and 1 hour, respectively, before the closing times indicated.

The park
The park is open all day, every day.

Guided tours at the Palace of Fontainebleau

Full price/ reduced price: €7/ €5.
Buying a ticket for a guided tour entitles the visitor to a reduced rate for access to the Grands Appartements. Reservation not required.

Enquête au château (Investigation at the Palace) : Secret passages and hidden rooms: a journey in search of treasure. Fun and educational.

A l’écoute de l’histoire (Listening to history): Discovery of historical events at the palace.

Visits for Children at the Palace of Fontainebleau

A visioguide for children 7-12 years old. (available in 5 languages)

Game booklet
One game booklet is available on request at the reception of the castle: “Les jardins du château” (The Palace Gardens), for 10 years old and up.

The sovereign Grands Appartements (State Apartments) retain a wide coherence in their decorations and furniture, amassed during the four centuries of occupation, and allow visitors to imagine the splendors of royal life. These rooms, decorated in pure Renaissance style, reflect the artistic importance of the palace in 16th century Europe. The decorations, unique in France, were commissioned by François I and Henri II to the Italian artists Rosso and Primatice.

The tour of the apartments starts on the first floor of the castle through the antechamber of the Galerie des Fastes (Gallery of Splendors) on the right after the stucco staircase. In the Galerie des Fastes, most of the paintings (19th century) depict distinctive scenes from the life of the Palace. 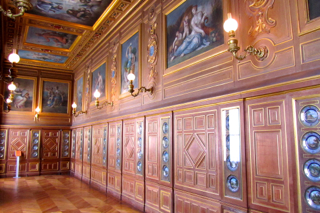 The paintings in the Plate Gallery were completed by Ambroise Dubois around 1600. The gallery is named after the 128 plates in Sèvres porcelain, which show the history of the Palace de Fontainebleau (19th century). This gallery also features a memorial wedding cabinet honoring the marriage of the Duke of Orleans (son of Louis Philippe) in 1841. Its decoration depicts scenes from the ceremony. The tour continues back toward the gallery entrance.

An exceptional ensemble consisting of eleven pieces, the Papal Apartments were arranged for the stays of Pius VII at Fontainebleau. He came twice : in 1804 he stopped here on the road to Paris to crown Napoleon I, and then stayed from 1812 to 1814 under house arrest after refusing to yield to the demands of the Emperor. The sumptuous décor and eclectic furniture were chosen by Napoleon III. The magnificent ceiling dates back to the reign of Henry II. 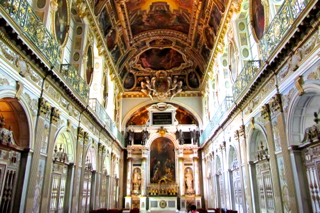 There was already a Trinitarian (or Mathurin) convent on the site of the Chapel of the Trinity, installed by Saint Louis. The chapel kept the name in homage of the religious community. Reattached to the royal domain under François I, it was rebuilt under Henry II and decorated by Henri IV and Louis XIII in a style characteristic of the Second School of Fontainebleau. The arch made by Martin Fréminet evokes the Redemption of Man. Marble statues on the left representing Charlemagne in the guise of Henri IV and on the right, Saint Louis in the guise of Louis XIII, are the work of the Italian sculptor Francesco Bordoni. These sculptures pay tribute to two kings who had sought the completion of the chapel. Louis XV married within these walls and Napoleon III was baptized here in 1810. 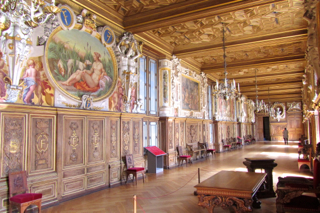 In 1528, François I decided to rebuild the old castle into a palace. And so begun the realization of the François I Gallery that connects the King's apartment to the Chapelle de la Trinité (Chapel of the Trinity). Then it was a private space, and it is said that François I even kept the key around his neck. The decoration, a mix of frescoes and stucco (a mixture of plaster and marble), is exceptional. Inspired by antiquity, we owe this work to Rosso and Primatice. The fine woodwork was carried out by Scibec and Carpi. Its richness and originality was a model for several generations of artists of the School of Fontainebleau. The scene of the royal elephant shows, by the choice of pachyderm, wisdom and royalty. Note also salamanders, emblem of the king, and the "F" of François. 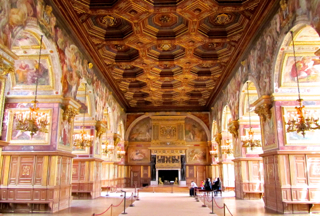 After crossing the Salle des Gardes (Guard Room), the Salon Louis XV (Louis XV room) and l’appartement de Madame de Maintenon (Madame de Maintenon’s Apartment,) visitors reach the Ballroom. Dazzling in its light and its dimensions, its decoration was carried out in 1550 by Nicollo dell'Abbate after drawings by Primatice. The vaulted ceiling is the work of Philibert Delorme. The function of this room is indicated in its name. It was also used for receptions and banquets. The themes covered by the mythological frescoes revolve around hunting and music. The Ballroom features an impressive fireplace and a beautiful inlaid floor. 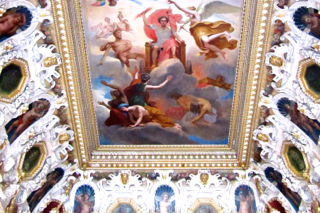 Originally known as Madame Anne de Pisselieu’s chamber (Duchess d’Etampes and mistress of François I), it was two centuries later that Louis XV had this, the King’s Staircase, built in its place to allow him to return to his apartment directly. The room is decorated with frescoes and stuccos telling the story of the loves of Alexander. These decorations are the work of Primatice, completed between 1541 and 1544. Visitors will note the graceful style of the slender female statues (caryatids) in stucco. The painted ceiling, representing the apotheosis of Alexander would be completed under Louis Philippe. 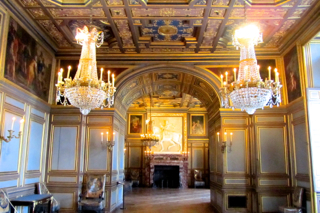 These rooms are the oldest parts of the palace, located in the medieval dungeon. The Saint Louis Rooms housed the king's chamber until the 16th century. Philippe Le Bel died there in 1314. They are decorated with portraits of Henry IV and a Gobelins tapestry from the 18th century. 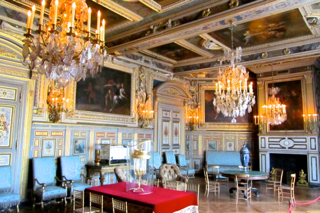 The Louis XIII Room served as a cabinet and the king’s office, though it is most famous as the birth place of the first son of Henry IV, the future Louis XIII in 1601. He was then baptized in the Cour Ovale (Oval Courtyard). The paintings are the work of Ambroise Dubois. The tour continues through the Salon François I (François I Room) to reach the Salon des Tapisseries (Tapestry Room).

Initially the guard room of the queen, Louis-Philippe had it transformed into a reception room. It was during the reign of Napoleon III that the room was decorated with the lounge furniture and tapestries that can be seen today, reflecting its name, the Tapestry Room. They represent the history of Psyche (character from Greek mythology). The fireplace dates back to 1731. The Galerie de Diane (Diana Gallery) is past the antichambre de l’Impératrice and the Appartement des chasses (Hunting Apartment) on the right. 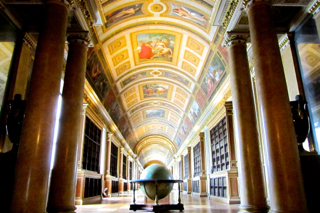 Originally built by Henri IV for his wife, the Diana Gallery illustrates the myth of the goddess. Rebuilt under Napoleon I, it became the longest gallery of the palace. The ceiling, painted under the Restoration, replaces the decoration of the Second School of Fontainebleau. Then Napoleon III transformed it into a library in 1858. One can also admire the art gallery, open since 1998, in the rooms adjoining the gallery. 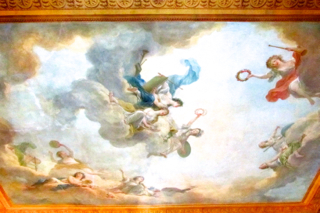 Formerly the game room of the Empress. The beautiful dresser was made by the cabinetmaker Beneman in 1786 for Marie-Antoinette, wife of Louis XVI. The ceiling, representing Minerva crowning the Muses, was painted by Berthélémy. 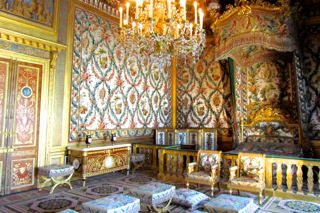 The different designs of the Empress’ Bedroom were made for successive queens (Anne of Austria in the 17th century, and Marie Leszczynska and Marie-Antoinette in the 18th century). The bed was designed for Marie Antoinette, but made in 1787, 2 years before the Revolution, she never had the opportunity to used it ... From 1805 onward the empresses Eugénie and Marie-Louise used it again as a bedroom. Cross the queen’s boudoir to reach the Salle du Trône (Throne Room). 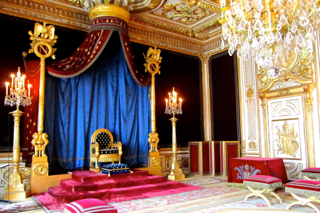 What is now called the Throne Room was first used as a bedroom by the kings from Henri IV to Louis XVI, before Napoleon I used it for his seat. The furnishings and decor of this room have been preserved from this latter period. The throne dates back to 1808.

The Council Room took the form of a semicircle from the late 18th century. Features a decorated ceiling depicting the four seasons, and gorgeous woodwork. 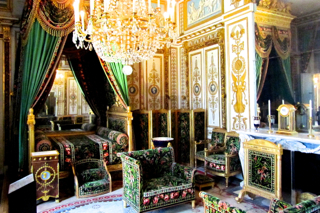 The Interior Apartment of Napoleon I consists of a series of rooms appointed in 1808 for his use : two bedrooms, a study, a bathroom, a Salon des Aides de Camp (Chief of staff Room) and the antechamber. The decor dates back to Louis XVI and the furniture to Napoleon I. The apartment is composed of the Salon particulier de l’Empereur, or the Salon de l’abdication (Abdication Room). It was in this apartment, which remains in this most recent state, that the Emperor abdicated the throne on April 6, 1814. He would also try to commit suicide in this room a week later.

It is included in the visit of the Grands Appartements. See "Museum".

Guided tours, no reservation necessary. Inquire at the reception desk upon arrival.

After Louis XV, Napoleon I converted the rooms on the ground floor of the castle located in the wing of Grands Appartements. He used the Small Apartments as private ones for himself and for Josephine and Marie-Louise. Note in particular the beautiful Salon Jaune de l’Impératrice (Yellow Room of the Empress, 1808).

Visit of the Chinese Museum
Price: €3 / free for children- 12 years old, in addition to the admission fee including the HistoPad, from 12 years old.
HistoPad available in 12 languages.

Created by the Empress Eugenie in the heart of the Great Pavilion, the Chinese Museum of the Empress features a beautiful collection of objects from the Far East, either from military campaigns of her husband, Napoleon III, or given as gifts from the Embassy of Siam.

Located on the ground floor of the Galerie de Diane (Diana Gallery), the Gallery of Stags was decorated with many hunting trophies during the reign of Henri IV. It features beautiful bronze statues made by Primatice for François I. It is in this room that Queen Christine of Sweden assassinated her lover, the Marquis de Monaldeschi in 1657.

The Hunting Apartment’s decor is in perfect accord with its name. Nearly 40 paintings from the 18th century adorn the woodwork, and the outstanding tapestries Oudry illustrate the hunts of Louis XV. This first floor apartment was the residence of the son of Napoleon III and Eugenie. Another room of the Hunting Apartment was recently converted into the Galerie des meubles (Furniture Gallery).

The Furniture Gallery is located in the Hunting Apartment, on the ground floor. The gallery presents a selection of furniture, carpentry, cabinets, objets d’art and textiles from the Palace (18th to 21st century).