The town of Versailles (non classified)

The town of Versailles

The city of Versailles developed following the construction of the palace under Louis XIV, though a modest-size town had already existed under Louis XIII.

A visit to the city of Versailles can help visitors complete their historical vision of the area, especially in understanding the period of royal residence and the Revolution. The Notre Dame neighborhood was the first to be created, on the orders of Louis XIV (from 1671 onward). The old Versailles, the historic heart of the city, is full of beautiful buildings and monuments.

On the other side of the Avenue de Paris, the Saint Louis neighborhood developed in the 18th century. It houses the Saint-Louis Cathedral, the vegetable garden of the King and the "carrés Saint Louis," little houses (or huts) that served as the site of the “new” market from 1737 onward. These stalls were later raised up off of the ground and inhabited. The neighborhood has an outstanding 18th century architectural unity. 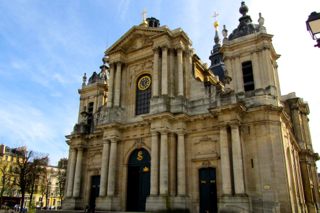 The Notre Dame neighborhood was the first area of the town to welcome shops and boutiques. The market that still stands today was established in 1841.

Greeters, an interesting way to visit the city of Versailles

A "greeter" is an inhabitant of the city that volunteers to give free, guided visits of the city in partnership with the Tourist Office, including his or her neighborhood, favorite places, lifestyle and city history. Each Greeter offers a customized tour for discovering well-known attractions or hidden treasures and great stories of Versailles. More information available at the Tourist Office.

Installed by Jean Baptiste La Quintinie for Louis XIV in 1682 on 9 hectares, the King’s vegetable garden provided vegetables and fruit to the court, but also to the needy of the city. Today the National School of Landscaping can be found nearby. The garden shop offers seasonal fruits and vegetables from the garden, as well as other food-based products.

Passionate about ball sports, the royal family had a dedicated space built in 1686 for the celebrated game of real tennis. 'Jeu de paume' was the forerunner of tennis and was played with a wooden racket. It is easy to imagine Louis XIV competing in a match with calls of encouragement being shouted out by the queen and his court.

Two hundred years later and the founding event of the French Revolution and the abolition of the monarchy – the famous Tennis Court Oath – took place in this room. Here, 578 deputies of the Third Estate met and declared themselves the 'National Assembly'. They swore that they would not disband until a new French constitution had been adopted. Several weeks later the people stormed the Bastille on 14 July 1789.