The Upper Town of Provins

The Upper Town of Provins

The Upper Town is characterized by its small houses in stone and timber, as well as its parks and gardens. It is lovely to stroll through the picturesque streets, where you feel like you’ve returned into the past, 800 years ago. Wandering aimlessly around Provins is the best way to discover the town, following the informational signs the present the main monuments. 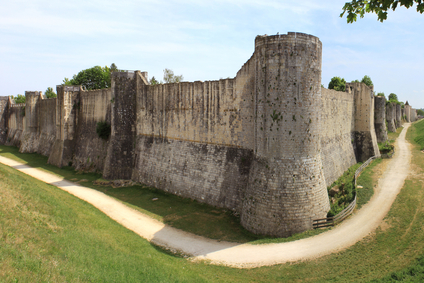 The Upper Town was fortified from the 11th century onward. Then, with the expansion of the city, the fortified walls were pushed back in the 13th century, thereby extending their scope by 5 kilometers. At 25 meters high, the ramparts represented one of the most impressive fortified walls of France. Its 22 towers strewn along the walls, come in all forms: round, rectangular, hexagonal, octagonal, square, with spurs .... Today you can still see the 1,200 meters of this remarkable collection of medieval military architecture. The missing parts of the wall, whose stones were used to build homes, were located on a path along the current Allée d’Aligre. 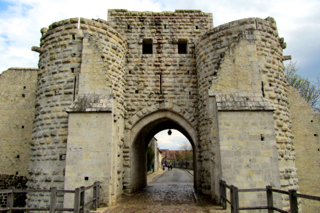 The Porte Saint-Jean and the Porte de Jouy

Both of these gates were constructed under Philip the Fair, and gave access to the Upper Town. They had a protection system of locks. They are both remarkable examples of the royal gates of the 14th century. Porte Saint-Jean, with its two almond-shaped towers, assured the defense of the old road to Paris. The curtain walls and towers were strengthened by a strong, sloped mound at their base. The gates are surrounded by an impressive moat defensive system supplemented by numerous loopholes and a crenellated parapet. 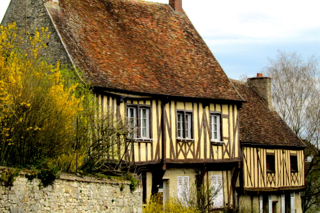 This square is lined with beautiful medieval buildings (Maison aux 4 Pignons, Maison des Petits Plaids, Hôtel de la Coquille and the remains of the Eglise Saint-Thibault). It was the center of the city, and in the middle stands the “Croix des Changes" or "Croix aux Edits," at the foot of which were proclaimed the count's edicts.

This merchant's house, built in the 13th century, hosted the covered market during fairs (see "Museums"). 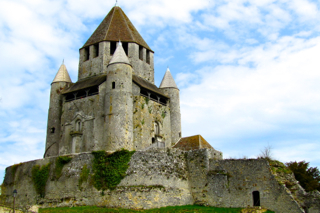 Built in the 12th century, this dungeon of complex architecture (square at its base and octagonal in its upper part) was the symbol of the power of the Counts of Champagne. The base of the building was reinforced during the British occupation of the city in 1432. The first floor features a beautiful vaulted guardroom with projected images on the walls. The dome is opened at the top to permit the passage of supplies to soldiers, from which rises the stairs to the Governor’s room (and his latrines) and the parapets. Very nice view of the city and its surroundings from the top. The tower was covered by a magnificent conical roof in the 17the century, and the bells from the bell tower of Saint Quiriace, collapsed in 1689, were installed. 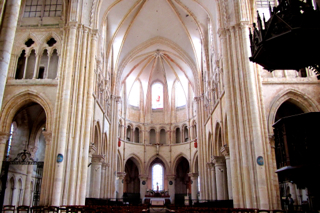 The Collegiate Church of Saint Quiriace was founded in the first half of the 11th century. The following century, the Canons who occupied it would take on a project to enlarge it. Thanks to the privileges granted to them by Henry the Liberal, including tax collection, the construction of the church began with the impressive choir. Work continued with the nave and its first two bays. But soon the financial difficulties facing the city from the late 13th century onward would prevent the work from being completed, though the nave and the portal should have gone all the way to the end of the square, by the cross. It would remain permanently unfinished, which still gives it a strange impression today. The dome was built in the 17th century after a fire that caused the arch above the transept to collapse.

The Maison Romane (museum of Provins)

Located at the foot of the Tour César, it is considered one of the oldest houses in the village (10th to 11th century). This house, located in the former Jewish district, probably served as a synagogue and rabbinical school in the 13th century. Today it houses the Museum of Provins (see "Museums").