The Vézère Valley and its villages

The Vézère Valley has been occupied for tens of thousands of years, and the remains found on site left a precise and detailed record of the lives of people during prehistoric times. But the Vézère Valley also features beautiful scenery, numerous castles and mansions, a relaxed lifestyle and a renowned gastronomic scene. The riches of this valley are numerous and will delight all lovers of heritage, big and small. The Vézère Valley is also suitable for many outdoor activities : swimming, fishing, hiking or horseback riding, canoeing, ...

Family walks
Probably one of the best ways to discover the natural and cultural wealth of the Vézère Valley. Guidebooks and detailed hiking information sheets are available from the Tourist Offices.

Over water
Vézère can also be discovered on the water. A peaceful canoe trip at the foot of the limestone cliffs is another way to discover the sites and their environment that unfolds along the banks.

Discover the terroir
The Vézère Valley is a land of gastronomy whose reputation is second to none : meats, foie gras, walnuts, truffles, strawberries ... so many specialties to discover. To enjoy these treats, there are two possibilities : going to a restaurant, or to the farmers' markets that are held during the summer, where you can buy high-quality, farm-fresh products and meet the producers (see "Markets" under "Tourist Information"). 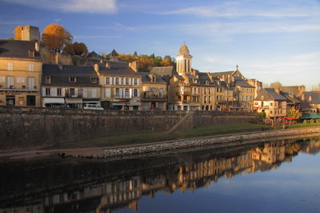 The territory of the village of Montignac has been occupied since the Paleolithic era, and then by the Romans. This charming little village with medieval streets also has a rich religious heritage. But the main attraction of the village is indeed its access to the world-famous Lascaux cave. 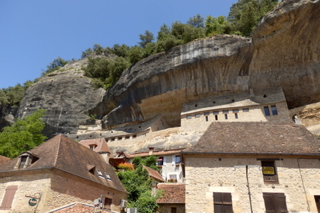 The vast majority of sites are located around the village of Les Eyzies. It is the largest concentration of prehistoric sites in Western Europe. The town and its surroundings have been inhabited since the Paleolithic era, evidenced by the large number of caves and shelters in the vicinity. This is where the study of prehistory was born, and the village is considered the world capital of the prehistoric era. Big names in this science, such as Peyrony, Lartet, Capitan, Fathers Breuil and Glory, all studied our ancestors and their way of life. They found the Cro-Magnon man, and studied cave art.
Several sites are located near the village. You can get there on foot. Information available at the Tourist Office.

Today Le Bugue retains few traces of its past, however, old streets and some old houses are strewn about the village. A market has been held on Tuesdays …  for over six centuries!

The most beautiful villages in France

The Vézère Valley also houses villages classified among the most beautiful in France, such as Saint Léon sur Vézère, a small village that has retained its beautiful medieval architecture. Of note in particular are the Romanesque church of the 11th century, and an architectural ensemble from the 16th century : the Manoir de la Salle, the Château de Clérans (castle), the Château de Chabans (castle), the Chapelle expiatoire (chapel). The prehistoric sites of Moustier and Conquil are located nearby.

The small village of Saint Amand de Coly, near Montignac, is dominated by an imposing and beautiful defensive building, the Abbey, built by the brothers of Saint Augustine in the 12th century. This picturesque village is organized around it. If you want to visit the village and its surroundings, three thematic itineraries are offered by the Tourist Office: history of the village, a tour of the wilderness or a recreational tour based on the fairy tales and legends of the Périgord region.