Other attractions in Arles

Beyond the exceptional historic heritage that qualifies Arles as a World Heritage site, other discoveries, though unrelated to this classification, deserve special attention. This is the case of Vincent Van Gogh, the painter who lived here and was inspired by the colors and light of the city and its surroundings. In addition, the Jardin Hortus allows young people to learn about ancient games.

In February 1888 Van Gogh arrived in Arles and remained there until May 1889. His stay in the city would be the painter’s most productive period, during which he produced about 300 drawings and paintings. In the city, the places where the artist set up his easel are marked with signs and a rendering of each of his paintings. Ten places are referenced:
• Place du Forum : "café La Nuit" (“Café Terrace at Night”)
• Trinquetaille Bridge : "L’escalier du pont de Trinquetaille" ("The Trinquetaille Bridge")
• Quai du Rhone : "La nuit etoilée" (“Starry Night”)
• Place Lamartine : "La maison jaune" (“The Yellow House”)
• Mireille Street : "Vieux moulin" (“The Old Mill”)
• Garden of the Boulevard des Lices : "Jardin public" (“The Public Garden”)
• Espace Van Gogh : "jardin de la maison de santé" ("Garden of the Hospital in Arles")
• Route along the Canal d’Arles to Bouc : "Pont de Langlois aux lavandières," more commonly known as "Pont Van Gogh" (“The Langlois Bridge at Arles”)
• The Arena and Alyscamps were also immortalized in many paintings.

To learn more about the man who cut off his own ear :

The Van Gogh walking tour
A marked pedestrian route that allows visitors to go at their own pace. Discover places that inspired the artist and that are immortalized through in his works. More information available at the Tourist Office. 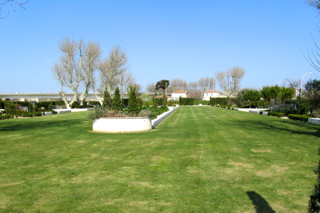 This Roman-inspired garden features play areas based on ancient models, thematic spaces, and relaxation and rest areas. Visitors can play by Roman rules, competing in strategy and skill in chess games, ball games, hopscotch or jacks.

Game Kit : includes rules and game pieces for the games offered in the garden. Available for free at the museum reception desk.