Further evidence of Roman greatness in Orange: the Triumphal Arch. It was built north of the city on the Via Agrippa (ancient forerunner of National Highway 7), which then connected Lyon to Arles.

It was erected in tribute to veterans of the Second Gallic Legion who had founded the city. The Arch served more as a commemorative entrance to the city rather than a true “Arch of Triumph”, as the military successes were celebrated only in Rome. Adorned with Corinthian columns, this arch is an outstanding monument of Provençal Roman art. The decor is meant to evoke the omnipotence of Rome. 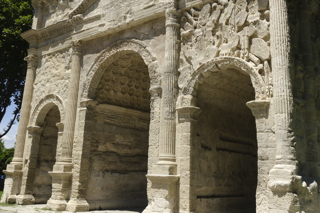 The Triumphal Arch consists of a monumental gate with three bays (or arches) and two attics (two small floors, instead of one, separated by molding), which was unusual at the time. The Arch is decorated with rich sculpted panels of Celtic weapons: shields, helmets, signs ... resulting in one of the most beautiful bas-reliefs depicting the establishment of the Pax Romana. On its east and west sides, the Celts are chained in the representations.

A more naval theme is also visible on the Arch. Under the watchful eye of mermaids and sea monsters, marine sculptures bring to mind the supremacy of the Imperial Navy. On the upper north side, Roman cavaliers and Gallic infantrymen face off in a beautiful frieze.