Other villages and landscapes of the Jurisdiction

Villages and landscapes of the Jurisdiction

The landscapes of the Jurisdiction are marked by viticulture, and those who lived from this trade have left us with many historical, religious, civil and military monuments, built with local limestone. These cultural landscapes, shaped by human, still live on today. Indeed, wine production has yet to cease in two thousand years. It is this heritage that makes this classified site so unique.

For over 2,000 years grapes have grown on the territory of the Jurisdiction of Saint Emilion. This culture intensified in the Middle Ages, and the quality of its soil and ancestral trade knowledge was finally recognized in the 18th century. At that time, many stately wine estates and vineyards emerged. In parallel, after the 11th century, the religious influence on the territory became dominant, and its strategic position on the Pilgrimage Route to Saint Jacques de Compostela amplified this phenomenon. Many chapels, churches, monasteries and hospices, built in Romanesque and Gothic architectural styles (in limestone), dot the countryside.

The villages of the Jurisdiction of Saint-Emilion contain several religious or seigniorial architectural treasures that are worth the visit. These villages seem to blend seamlessly within the vineyards and wine estates that stretch to the horizon. Interspersed with view points and exceptional panoramas, a tour on the roads and trails of the Jurisdiction is an invitation for discovery. 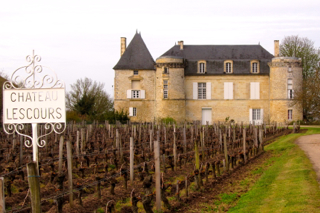 On highway D19 toward Libourne, on the outskirts of the village, it is one of the oldest pieces of evidence of human occupation within this heritage site : the Menhir de Pierrefitte (3,500 years old). It is a large, oval limestone block, which stands over 5 meters high and weighs 30 tons. The site hosts festivities each year to celebrate the Midsummer Solstice (Saint John’s Day).

The Seigneurie de Lescours, near the menhir, dates back to the 14th century. This is one of the oldest estates in the Jurisdiction. The village also has a charming Romanesque church from the 11th and 12th centuries (renovated thereafter). 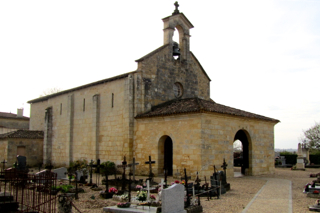 Located on the hillside, on the site of the old town of Vignonet, the Romanesque church dates back to the 12th century. The village was later moved to the river for commercial reasons, with the opening of waterways and port construction for easier accessibility. 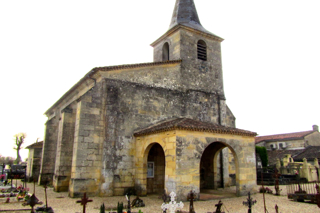 Romanesque church from the 12th century, substantially renovated in 1863 when the tower was raised. Its facade, however, retains some traces of its Romanesque origins.

At the exit of the village, a monument recalls the tragic end of the Girondin activists, who committed suicide after having hid in Saint-Emilion in 1793. The last leaders were guillotined some days later in Bordeaux. 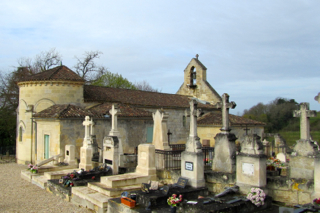 The geographical position of Saint Laurent offers a magnificent view from the plateau of the church that dominates the village. Dating from the Romanesque era and renovated in the 19th century, it has an original, two-basin font from the 16th century and a beautiful paneled roof, also from the 16th century. 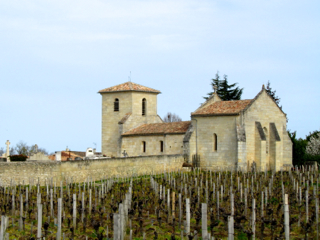 At the end of a winding road is the village of Saint-Hippolyte, nestled in the hillside. Dominating the area, the Château Ferrand (16th and 18th centuries) and the church are worth a visit, simply for their singularity. The choir of the church dates back to the 14th century. Visitors will also notice the ceiling timbers, which date back to the 16th century.

Three hundred meters from the church (leave the car in the parking lot), the Grottes de Ferrand (caves) were dug into the cliff in a series of small rooms, representing an underground maze. It is also called the Grotte des Druides, or the Cave of Druids. Outside visitors will enjoy a magical and romantic setting among vineyards and gardens. 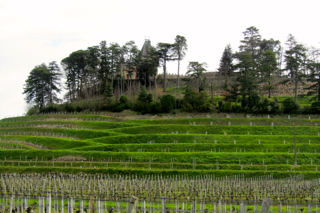 Charming village. Romanesque church from the 11th century, restored in 1891. The church is home to six wooden stalls adorned with carved figures of the senior clerics of the court of the Collegiate Church of Saint Emilion, framed with paintings.

Visitors will pass in front of the Château Pey-Blanquet (16th century). Then, on a rocky promontory overlooking the grounds of the Château de Pressac (15th century, later reworked), recognizable by its fortifications and its terraced vineyards. This is most likely the site where the British signed their surrender after the Battle of Castillon, which ended the Hundred Years’ War (1453). 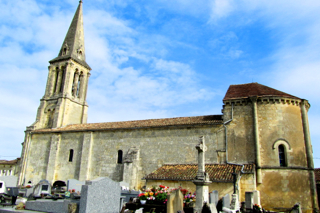 The center of Saint-Christophe has several monuments of great interest. Of particular note is the former rectory dating from the 15th century, the Romanesque church with its magnificent doorway from the 12th century and its tower, built in 1860. But what characterizes the town are the many wine estates, proof of a prosperous and aristocratic wine history.

The Château Laroque (13th century, grand cru), is a perfect example. Partially rebuilt in the 18th century, a tower and walkway from the 15th century are still visible today, remnants of a period of splendor.

The area of the Jurisdiction of Saint-Emilion is ideal for exploring the magnificent wine estates hidden along the countryside.

At the heart of these properties, often family-run, visitors come in direct contact with the producers, and are able to discover a wine full of character, rich from ancient traditions (tastings are proposed at the end of the visit). The vintners will not hesitate to share their passion with visitors, so questions are welcome. These visits are primarily moments of cultural and gastronomic exchange.

The Tourist Office offers many themed tours of the surrounding wine estates : those with outstanding architecture, with underground galleries, ones specializing in families or organic wines ...

Tour of the vineyard, the winery and the barrel cellar. Wine tasting at the estate. Departs from the Tourist Office, with guide. Transportation included in the price.

"Good information and suggestions for other sources of info. Worth it if you are going there."
Brunick, review on Amazon.com