This is the western part of the Canal du Midi. It is from the Naurouze watershed, located in this area, that the parting of the waters occurs. From this point, the water descends the slopes towards the Atlantic Ocean to the west, or toward the Mediterranean Sea to the east. These Montagne Noire (Black Mountain) waters feed the Canal du Midi at this, its highest point, through the Rigole de le Plaine (feeder canal). 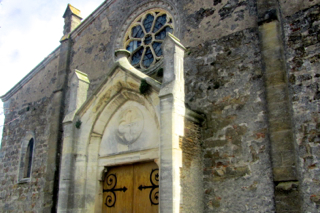 Traces of its history have been found in the area, from the 2nd century BC onward. Those interested in more information can visit the Maison de l’Archéologie (archaeology museum). 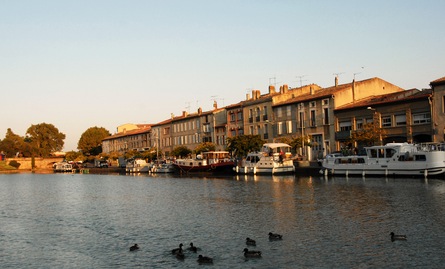 Crossing Castelnaudary was not initially planned in Riquet’s project because of the significant additional costs that would ensue, like for the crossing of Carcassonne. The canal was to go around the village, but unlike Carcassonne, the consuls agreed to take on the extra costs, estimating that over the long term the city would benefit from having a port on the canal. And it’s a good thing they did, because thanks to this investment, the town would experience a booming economy and an unprecedented prosperity.
Castelnaudary became the capital of Lauragais and the main port between Sète and Toulouse. Many transit activities developed over time: pottery, wood, wine and especially flour passed through its port before being distributed throughout the southwest of France.
Of the thirty mills working at the time of the flour trade, only one remains, fully restored :"Le Moulin de Cugarel" from the 17th century.

Castelnaudary was the third “couchée”, or nighttime layover, on voyages from Agde and the first on voyages from Toulouse for the postal boats. The “couchées” took place on the banks of the Grand Bassin, near the Ecluse Saint Roch. The large reservoir of Castelnaudary provided an important stop on the route of the Canal du Midi and served as a stop for many barges and pleasure boats.

In the summer: delivery service for hot cassoulet on the canal from June to September and activities on the port.

Boat rental by the day or longer in Castelnaudary

Le Boat
Le Grand Bassin, 11400 Castelnaudary
Website - tel : 04 68 94 42 80.
Also located in Portiragnes, Trebes, and Narbonne Homps. Rentals from two days to two weeks. Departure possible from many ports along the canal. This company has the largest fleet of rental boats.

Located at 190 meters above sea level, this point is the culmination of the Canal. Watershed and water supply from Saint Ferréol. An obelisk pays tribute to Pierre Paul Riquet. Also features marked trails for exploring the surroundings.

The sources of the Canal du Midi

Saint Ferréol (31250)
The Saint Ferréol lake was formed following the construction a dam 871 meters long and 35 meters high, built by Pierre Paul Riquet. The lake is filled by the Rigole de la Montagne (feeder canal) that captures water from the rivers and streams on the Montagne Noire (Black Mountain). Downstream from the lake, the Rigole de la Plaine guides water to the watershed point of Naurouze.

To see: lake, dam and arch (tunnel) of Vauban near the village of The Cammazes

To do: Bicyle along the Rigoles built by Riquet.

Located at the foot of the Saint Ferréol dam, this museum presents the history of the creation of the Canal du Midi and its designer Pierre-Paul Riquet. A discovery course is available for children in the museum, featuring the projection of a video illustrating the history of the canal.

Back on the Canal du Midi 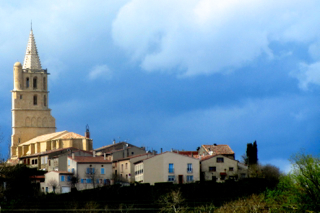 Formerly in this windy region there were many windmills, though today there remain very few, though some have been restored, including in Avignonet. Modern wind turbines have now taken over.

Not to miss nearby: Eglise Notre-Dame-des-Miracles (church), an old tower from 1354 and a restored wind mill.

Near the village of Avignonet-Lauragais is a highway viewpoint that has been installed along the canal, along with a port. The village can also be accessed from the highway. It is the gateway to the department of Haute-Garonne (the fourth and last department crossed by the canal). The paved bike path that joins Toulouse (50 km away) starts here and runs along the canal, and is called the Voie Verte. It is without a doubt the best stretch to travel by bicycle. 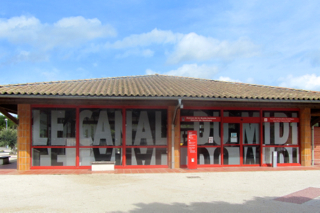 The Ecluse de Négra was the first “dînée”, or lunch stop, for the postal boats coming from Toulouse. The navigable aqueduct of Négra crosses a small stream, the Thésauque. Visitors will note the presence of a chapel, as in other sites, where boats stopped at the station for lunch or nighttime layovers.

Not to miss : The lock and aqueduct. 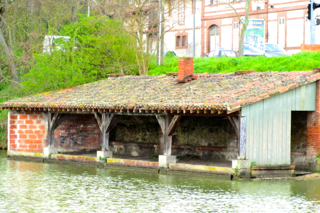 There is not only a lock but also a superb wash house, one of the last ones remaining from an era when they were very numerous throughout the canal until the last century.

Not to miss : an old wash house, a 12th century gothic church in the village.

The canal’s arrival in Ramonville is ostensibly announced by the many houseboats parked on the canal banks. These ancient trading barges are often been renovated as places of residence. Ramonville Saint-Agne features a veritable marina, called Port Sud, which is very well equipped. A very pleasant stopover, its proximity to Toulouse also makes it convenient for exploring the city and its surrounding areas.

Festival Convivencia
Association Convivencia
4 rue Claude Chappe, 31520 Ramonville-Saint-Agne
Website - tel: 05 62 19 06 06.
The Convivencia Festival is a festival navigating on the Canal du Midi, offering at each stage a different musical program. World music concerts are given from the deck of a barge, rhythms lead the audience in a friendly atmosphere on the dock where you can eat and drink. Find news on the festival's website.

After Ramonville, the canal arrived in Toulouse, the last stop on its route. The canal runs through the city to join the Garonne and its lateral canal, the resulting ensemble called the Canal des deux Mers (Canal of Two Seas). Many water features are positioned along the way: bridges, locks and ports, one after the other. The Port Saint Sauveur was used for handling goods through the canal. It is here that the postal boats began (or finished) their journey.

Further on, was the Port Saint Etienne (now defunct). This is where the tomb of Pierre Paul Riquet lies. The offices of the VNF (Waterways of France) and the archives of the canal are located nearby. Even further downstream, the Pont Riquet crosses the Canal at the top of the Jean Jaurès alleyways, where the statue of Pierre Paul Riquet stands (in white marble, 1853).

The locks Bayard, Béarn des Minimes follow one another. Finally, the canal ends its course at the final Ecluse aux Ponts Jumeaux (Twin Bridges lock) before flowing into the Bassin de l’Embouchure (Basin of the Mouth). 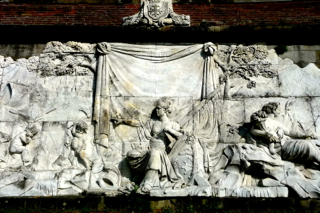 Bas-relief of the Port de l’Embouchure (1773-1775) by François Lucas.
The work is an allegory : to the far left is the canal represented by a bearded man; on his right, two young geniuses, equipped with pickaxes, build a lock. In the center, Occitania is at the helm of a boat emblazoned with the coat of arms of Languedoc. In commanding gesture, she instructs the canal to receive the waters of the Garonne River, the other female figure in this fresco. The Garonne, holding a cornucopia, urges a genius laborer to encourage his oxen to draw a furrow in Lauragais.

"It was very useful on our recent trip on the Canal du Midi."
Aikenite, review on Amazon.com