What is striking when you first arrive in Albi is the brick, to which the city’s urban complex owes its unique splendor. Unique in its colors – pink, red and yellow-orange – that change from sunrise to sunset. Unique in the power that exudes from the façades of the Saint Cécile Cathedral and the Berbie Palace. Unique in its architectural harmony, maintained for centuries, where Romanesque, Gothic and southern Renaissance styles collide, and merge. Located on the edge of the Tarn River, the old medieval town of Albi offers visitors a charming and harmonious architectural and urban ensemble.

The Episcopal City of Albi presents a building complex representative of the type of urban development in Europe from the Middle Ages to the present day. Its monumental and urban elements are complementary and well preserved, in a subtle harmony of tones and appearance thanks to the use of local fired brick. It is a testimony to a programme which was simultaneously defensive and spiritual, and which was implemented by the Roman Catholic bishops following the suppression of the Albigensian, or Cathar, heresy in the 13th century. The Saint Cécile Cathedral is the most remarkable monumental symbol, in a Gothic architectural style unique to southern France, to which grand internal painted murals, a choir, and a late-Gothic statuary were added in the 15th and 16th centuries. Finally, the outstanding value of the city is expressed by a medieval urban landscape that is both well preserved and extremely authentic.

Criterion (iv): The historic city of Albi presents an outstanding medieval architectural and urban ensemble. It is homogeneous and is expressed through a high-quality urban landscape that possesses high visual coherence because of the generalised and enduring use of local fired brick. The Saint Cécile Cathedral is an exceptional architectural and decorative example of the adaptation of the Gothic style the context of Southern France.

Criterion (v): The Albi urban site developed gradually over the centuries, and notably from the Middle Ages onward. The events of the Albigensian Crusade transformed it into a symbolic Episcopal city structured around its Cathedral and its Episcopal fortress-palace. This is one of the rare examples of ensembles of this kind that are complete and well preserved to such a high degree. It expresses, in a very comprehensive way, a type of urban settlement that was characteristic of medieval and Renaissance Europe.

In ancient times, the city was an oppidum (fortified village), first occupied by the Celts, then by a small Gallo-Roman settlement. From the 10th century onward, the town thrived on an economy based on agriculture and trade thanks to the Tarn River, which allowed goods to be transported from Albi to the Garonne River. During this time and until the 13th century, the city was ruled by the Counts of Toulouse and then later under the dynasty of the Trencavel viscounts.

From the 13th century onward and with the support of the king, the city became a powerful Episcopal city in the wake of the Crusades against the Albigenses (or Cathars). The Church committed itself to the elimination of the local elites, who were favorable to catharism. The bishop became lord of the city, and oversaw its spiritual and material development, and eventually the diocese of Albi became one of the richest in France until the Revolution. Local nobles continued to challenge the financial, military and spiritual power of the bishops, and fearing an uprising, these builder-bishops began erecting an Episcopal city to assert their power, starting with the construction of the Berbie Palace and the Saint Cécile Cathedral.

From the 13th to the 18th century, the urban landscape, at its origins austere and military, was gradually shaped by different architectural styles. During the 15th century and thereafter, threats receded and the city regained a certain economic independence thanks to the extraction of pastel, which provided a new period of prosperity for the city. The architectural style became more opulent and harmonious, and buildings opened to the gardens and the city. In the village, individual Renaissance-style mansions flourished.

And so the Episcopal city became, and remains, an exceptional urban landscape, unique in its harmony and the power it generates, its beauty only enhanced by the light reflected by and on its brick façades.

The heresy of the Cathars was most likely a sort of souvenir brought back from the East by the Crusaders, and was quickly circulated in the southwest of France in the 12th century. This belief probably blossomed as a response to clergymen who were seen as disconnected from the social realities of the time. The Cathars advocated high spirituality, justice for all and non-violence, and as such they quickly gained the respect of the local population. Their belief system included two worlds: in the first, the living world, existed the work of the devil; in the second, the immaterial world, reined the God of good. The Earth was considered the work of evil, as if the final judgment, and thus the end of the world, had already taken place. And as such they rejected the idea of incarnation, redemption and resurrection. Two crusades against the heretics, decreed by the Church between 1208 and 1229, put an end to catharism.

The “brique foraine”, oven-fired brick that was produced locally, had many advantages: easy to use, quick to put into place, and strong. It was used as the base material for all construction in the area. Unlike stone, the simplicity of brick represented a response to the luxurious places of worship for which the Church was criticized.

Guided tour "the Must" (in French)
Tour of the episcopal city, the Sainte Cécile cathedral or the historic center.

Tips for Visitors
Albi City Pass: €13.
Provides discounts on entrance fees at different attractions, as well as on merchandise in selected shops. More information available at the Tourist Office. 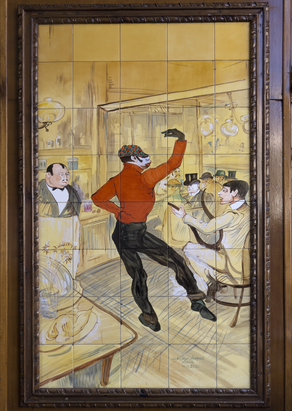 This world-class museum houses collections left to the painter’s hometown by his family (Henri de Toulouse-Lautrec: 1864-1901). Two floors retain over one thousand works (paintings, posters, lithographs, drawings, etc). Museum visitors can follow the evolution of the artist in a chronological and thematic discovery of his work.

For children : booklet in 4 languages for free. Workshops on Wednesday afternoon.

Jean-François Galaup de Lapérouse was only a captain of a ship when Louis XVI entrusted him with the greatest expedition of his reign in 1785. With his two frigates, he embarked on a world tour that will never finish. He .will run aground in the South Pacific in 1788.

For children: booklet in French for a funny discovering of the museum.

This museum of miniatures presents a large collection of houses and miniature shops - scale 1/7 ° - Set of 34 rooms including two parts: rooms of a wealthy end 19-century residence and traditional buildings including shops on the ground floor and the apartments in floors.

For children: cooking and creative workshops on Wednesday afternoons.

Albi Carnival (February)
One of the first carnival celebrations of the year. Main events include a parade.

Pause Guitar Festival (July)
Website. Free. A tribute to French music with more than 70 musicians. Concerts concentrated around the cathedral.

The selection of accommodation proposed below consists of establishments that offer quality services at competitive rates, they are considered as references in their respective categories. The addresses are inside or nearby the classified area. The prices shown are for the off season, on the basis of 2 people.

Restaurant in Albi and Toulouse