Though today the name Reims first evokes the capital of Champagne, now famous around the world, long before that it was the site of many important episodes of French history.

The cathedral was indeed the place of coronation of the kings of France, and in total, 32 sovereigns, including 29 kings, succeeded one another here in Reims, expressing through their crowning a superiority over their people and a proximity to God. The religious buildings in the city were certainly noble enough for the prestigious visitors they received.

The Notre-Dame Cathedral, the Basilique Saint Rémi and the Palais du Tau all contribute to this religious, architectural and historical ensemble, unique in France. It is on this basis that the city’s religious heritage was selected as a World Heritage Site.

The Notre-Dame Cathedral of Reims is a masterpiece of Gothic art: it demonstrates the remarkable mastery of new architectural techniques within the course of the 13th century, harmoniously combining architecture and carved decoration. The Abbaye de Saint Rémi (Abbey of Saint Rémi), the oldest of the two, still retains its beautiful nave from the 11th century, which houses the remains of Archbishop Saint Rémi (440-533). The first Episcopal palace, known as the Palais du Tau (Palace of Tau), played an important role in religious ceremonies. It was almost entirely rebuilt in the 17th century.

Reims, a city of great importance in early Christianity in Gaul, counted many archbishops who were important figures in the Catholic Church and who have since been canonized. This is the case of the most famous among them, Rémi (440-533), Archbishop who baptized Clovis and instituted the Holy Anointing of the kings. The ceremony took its fixed form in the 12th century and almost all French monarchs thereafter were crowned in Reims. For the anointing of kings, which was performed in the cathedral of the city, the vial containing the chrism, or holy oil, was brought from the Abbaye de Saint-Rémi.

The current cathedral was built on the site of a Carolingian church, which was destroyed by fire, and is one of the largest French cathedrals of the 13th century. With those of Chartres and Amiens (both listed as World Heritage sites), it marks the culmination of the classic Gothic style. All of the innovations found in Chartres are also visible in Reims, except that its builders, perhaps aware that the church would be the site of the coronation of the kings of France, gave it lighter structural elements, creating more bays in the walls to allow the greatest possible amount of light through the windows to illuminate the sacred space. No Gothic facade rivals that of Reims in the quality of its carved decoration. More than just decor, the sculptures of the Cathedral of Reims are an integral part of the architectural composition of the building.

The Palais du Tau, a former archbishopric, was both the Episcopal seat and a milestone in the course of the ceremony, as it was the venue for the coronation banquet. The beautiful 13th-century palace chapel and 15th-century banquet hall remain intact.

Criterion(i): For the outstanding handling of new architectural techniques of the 13th century and the harmonious marriage of sculptural decoration and architecture, the Notre-Dame Cathedral of Reims is one of the masterpieces of Gothic art.

Criterion (ii): The perfection of the architecture and sculptural ensemble of the church influenced many later buildings.

Criterion (vi): The cathedral, the archbishop's palace and the former Abbaye de Saint-Rémi are directly related to the history of the French monarchy and, therefore, to the history of France in general. These places were involved in the royal coronation ceremony, the result of an ideal balance between the Church and the State which made the French monarchy a political model throughout Europe until modern times. 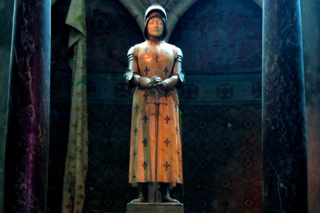 The legend says that Reims was founded by Remus, brother of Romulus, who had founded Rome. The city took its current name from that era. Inhabited for a long time as an oppidum (fortified village) and Gallo-Roman city, the city was populated by more than 30,000 people from the first century AD onward, and was one of the largest cities north of the Alps. At the time it was the provincial capital of Belgium, a vast territory that then included all of northern Gaul.

The city of Reims entered into the history books on Christmas Day 498, by its conversion to Christianity and the baptism of Clovis, king of the Franks, by Rémi, bishop of Reims. And from that point on the church and the state were definitively linked, bringing on the birth the French monarchy of divine right, a political model that influenced other European countries up until the modern era. This baptism was the founding act of the start of the Frankish kingdom, and of the anointing of the king in the cathedral of Reims. The tradition of the coronation of the kings of France in this same cathedral was introduced a few centuries later. The first to be crowned was Louis the Pious in 816.

From the 11th century onward, the prestige of the Holy Ampulla (see inset "Holy Ampulla") and political power of the archbishops of Reims made the Notre-Dame Cathedral of Reims the almost exclusive venue for the coronation of the kings of France. A total of 33 sovereigns, including 29 kings of France, were crowned in Reims, the last being Charles X in 1825. The most memorable remains the coronation of Charles VII, led by Joan of Arc (whose statue stands in the cathedral) in 1429 after the siege of Orleans during the Hundred Years’ War against the English. Meanwhile, in the Middle Ages, Reims was known for its textiles and draperies that artisans traded at the fairs in Champagne.

The coronation ceremony of the King of France

The coronation of the kings of France constituted a covenant between God and the king. In exchange for divine anointing, the king was committed to protecting the people, to supporting the religion and to establishing justice. The ritual of coronation evolved over the centuries: it first consisted of a single anointing on the forehead of the sovereign, and was completed over the centuries by the ruler’s coronation, the surrender of a scepter, the oath to defend the church, the giving of the ring and sword and the oath against heretics (13th century). Finally, a morning ceremony at the Palais du Tau and a procession to the cathedral were added in the 14th century.

During the 17th century, the rise of champagne allowed the city to continue to thrive. But from 1914 onward, the city was scarred by German bombing for three and a half years during World War I. Its architectural and historical heritage was hit hard – 80% destroyed – and the cathedral was not spared either, hit by nearly 300 shells (see inset "Martyrdom of the Cathedral").

The reconstruction of the city at the end of the conflict and large-scale restoration initiatives conducted for the most majestic buildings such as the Cathedral, the Palais du Tau or the former Abbaye de Saint Rémi allow visitors today to once again admire these architectural masterpieces. And it was here, in Reims, that representatives of Nazi Germany signed the unconditional surrender on May 7, 1945, ending World War II.

Self-guided tours (via audio guides available at the Tourist Office)

Reims City Tour
Website
Adult price: €12/ Children price: €6.
Discover Reims or the vineyards of Champagne on a panoramic bus (duration: 1h). Guided tour in 6 languages.
Departure from the Tourist Office (near the cathedral).

Many guided tours in English
For example : “Let us tell you about the Cathedral", "the 10 unavoidable"or "Reims by night".

Guided tours with tablet
Tablet available for hire from the Tourist Office: €6.
The free app "Reims Decouverte" is available for download from the Apple Store.

The Greeters
Explore the city accompanied by a resident.
Information: website
The Greeters, or hosts, are volunteers and Reims residents who are passionate about their city. They are available to help visitors discover the city in an atmosphere of friendly exchange (for free). 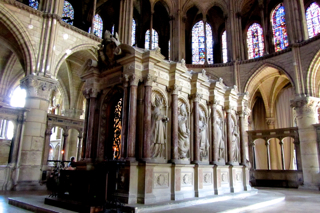 Within the old abbey buildings from the 17th and 18th centuries, the Saint Rémi Museum exhibits important collections that retrace the history of the city of Reims, from prehistoric times to the Renaissance. Some medieval sections of the buildings, such as the chapter house and parlor date back to the 13th century. The museum concentrates on four themes : archeological objects, the Gallo-Roman period, the history of the abbey and the military history of the city. Of note in particular are the magnificent 16th-century tapestries dedicated to Saint Rémi.

Main events of the year in Reims

Rêve de Couleur (June to August)
Sound and light show. Dream of colors, an exceptional lighting of the facade of the Cathedral.

Flâneries musicales d’été (mid-June to mid-July)
Website - The “Musical Strolls of Summer” event includes classical and jazz concerts at many historical sites of the city, including those classified as World Heritage sites.

Noël en Champagne (December)
A Christmas in Champagne: Christmas market and many activities.

Market
Covered market at the Halles du Boulingrin, north of the Hôtel deVille. Wednesday, Friday and Saturday from 6 a.m. to 1 p.m.

Parking
Paid parking is available near the cathedral.

City Bus
An electric shuttle runs through the city center. Free on presentation of a parking ticket dated the day, otherwise € 1.60.

The selection of accommodation proposed below consists of establishments that offer quality services at competitive rates, they are considered as references in their respective categories.

Reims, a World Heritage Site Secrets d'Histoire
back to top