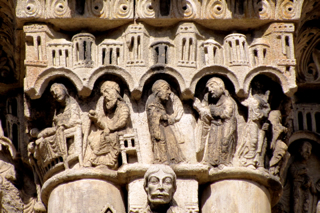 The sculptures and especially the windows of the cathedral were a true example of religious artistic expression of the time. They recount episodes from the Bible or the life of Mary, they are a major testimony of medieval spiritual expression and of daily life at the time. The Cathedral possesses many other treasures, starting with its crypts: the Romanesque crypt from the 11th century is the largest in France, and the other sits below the even more ancient cathedral. And if this cathedral became a major pilgrimage site, it is because of the relic said to have belonged to Mary, "the Veil of the Virgin," that the building guards within its walls.

The main dimensions of the Cathedral:
• Height of the vault: about 37 meters
• Length: 130 meters

Ticket purchase, tour departure and audio guide rental are all available at the shop located at the entrance of the cathedral, to the left of the Royal Portal. 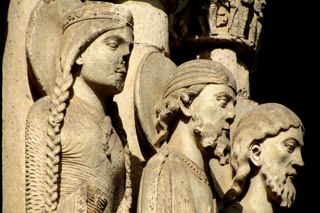 Sculptures of the Chartres Cathedral

Nine portals adorned with over 4,000 sculptures give access to the Cathedral. Completed in the 12th and 13th century with great precision, and an attention to detail pushed to its limits, they served the same function as the windows, namely the expression of Christian thought at the time, a sort of illustrated catechism.

The Main Facade of the Chartres Cathedral

Located on the western facade of the cathedral, it is the main access to the building. Framed by two towers, it consists of 19 statues and more than 300 figures of exceptional quality, made of polychrome. Survivor of the fire of 1194, remains of the previous Romanesque building (columns, foliage, interlacing ...) can be seen behind the sculptures. Combining artistic expression and philosophical thought, the Royal Portal presents a pictorial program evoking the Old and New Testament, mainly dedicated to Christ. Three tympanums evoke, from left to right: the Ascension, the glorious return of Christ and the Incarnation.

Above the main entrance, on the large tympanum, Christ is represented holding the book of life. He is surrounded by the symbols of the four Evangelists: the eagle of John, the lion of Mark, the bull of Luke, the man of Matthew, and on the lintel the 12 apostles. The purity of the features of Christ are of note.

In the center, statues serving as colonnades represent the others: David, Solomon and the Queen of Sheba. The expression of their faces, attention to detail, their gestures, their position ... everything is perfectly executed, confirming the high technical and artistic quality of the sculptors who produced these works.

The capitals, much more simply executed though extremely high quality, evoke the life of Christ. In the arches, Christ is glorified, while two angels bring him a crown.

The right door recounts the arrival of Jesus and his childhood. The door on the left, recounts his departure from earthly life : the Ascension. The apostles look up, and four angels respond.

In the arches of the side doors, seasonal work is represented (harvesting, threshing, etc ...), offering a vision of life in the 12th century. Zodiac signs, though less identifiable, are also present. 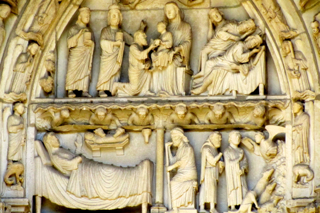 The north portal is also called the "Portal of the Alliance," covenant between God and humanity. The portal describes the wisdom of God sent to the Gentiles and the Jews of the Old Testament, and also depicts the life of the Virgin Mary and the coming of the Messiah.

This portal also features beautifully illustrated episodes of the world’s creation on the arches of the central porch. On the arches of the right and left porches, the work of the 12 months, zodiac signs and scenes of daily life are depicted. In the center, on the pier of the central bay, a statue depicts Anne carrying baby Mary in her arms. Above, on the tympanum, the virgin is crowned by Christ. In the doorway, characters announce the arrival of Christ, the Revelation. The frieze should be read from left to right.

The delicacy of expressions and attitudes of the carved figures on the North Portal is remarkable. The lintel on the left depicts a nativity scene, with Mary lying on a bed and Joseph watching over. The center lintel depicts the Dormition and the Assumption.

The South Portal is dedicated to the history of the Church. The apostles are represented on the central porch, confessors recount scenes from the life of Saint Martin and Saint Nicolas on the right, and the martyrs, including Saint Stephen (on the lintel), are on the left. The central porch evokes the resurrection and the Last Judgment. Saint Michael can be seen weighing souls, while the angels sort them between heaven and hell (on the lintel). A statue of Christ teaching with the apostles on either side of him stands on the pier.

The Towers of the Chartres Cathedral

La Tour du Midi known as Clocher Vieux (1165) is on the right when looking at the cathedral. Its spire which rises to 105 m is regarded by Viollet le Duc as close to perfection.

La Tour dite du Clocher Vieux. Although the tower dates from 1150, the arrow, in flamboyant style, was rebuilt in the early sixteenth century. 115 m high, it is one of the highest in France. 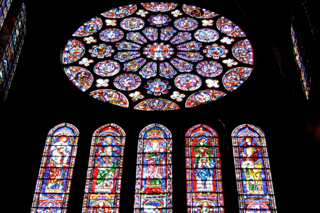 One of the wonders of the cathedral, the 172 exceptional stained glass windows were made by master glassmakers. It is simply the finest collection in Europe. Eighty percent of them still date back to the 12th and 13th centuries! Expressive and sparkling with color (especially the unique cobalt blue), they serve as illustrated stories, comparable to religious books for the illiterate. The windows recount the Bible and the lives of the saints, and pay tribute to donors who promoted the construction of the building, who are represented by scenes from daily life and the coat of arms of large families. Several glassmakers worked on this site, sometimes generating a few differences in style, genuine signatures of the artists themselves.

The windows remain a major source of information for knowledge of medieval history. They have lived through the centuries, the religious wars, the Revolution and two world wars with virtually no major damage, which only adds to what makes them so special and unique. During both world wars the windows were removed and stocked in a safe place.

The lower windows should be read from bottom to top, and tell a story in the style of a comic book. The Old Testament, episodes from the life of Mary and the history of France are all mentioned, however most of the images evoke the life of saints, apostles, martyrs, monks and prelates.

The glass walls located above represent prophets and saints, who participate in the representation of the heavenly Jerusalem that the building intends to evoke. 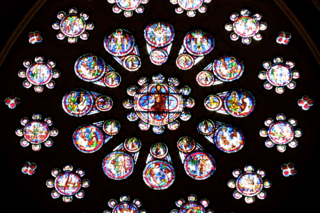 The western rosette is the oldest. The scenes, read from bottom to top, describe the Apocalypse. Apostles and evangelists surround the Christ at the Last Judgment.

The southern rosette represents the 24 elders of the Apocalypse, situated around Christ. Below, the four Evangelists are perched on the shoulders of four prophets.

The northern rosette was given by Louis VIII and Blanche de Castile. It represents the Virgin and Child surrounded by angels in the middle of the kings of Judah and prophets. 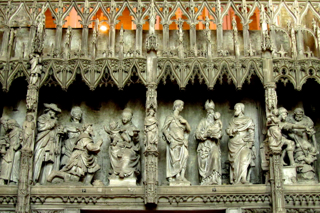 The choir screen isolated the canons who devoted themselves to prayer from the rest of the pilgrims and believers. Its fabrication lasted nearly a century, and was initiated by Jehan de Beauce. Covered with over 200 statues, the choir screen evokes episodes of the life of Jesus and the Virgin Mary. Above the north door, the images show Jesus on the cross, in the process of being raised.

For tours of the crypt, see “Organized Tours".
The present cathedral was built on the foundations of earlier religious buildings, and it has two crypts: the inner one, which is the oldest, and the outer crypt from the 11th century.

The inner crypt
In this inner crypt, or Saint Lubin crypt, vestiges of walls dating from the Gallo-Roman period are visible, as well as a room from a Carolingian church of the 9th century. The room was named after Saint Lubin, and is located under the master altar of the present cathedral.

The outer crypt
The outer crypt, or Fulbert crypt (named after the builder of the previous church), includes the inner one. It dates back to the 11th century. At 230 meters long, it is the largest crypt in France. The outer crypt includes in particular the Chapelle de Notre-Dame Sous Terre, a chapel dedicated to Mary, where pilgrims came to pray. It is also composed of other Romanesque and Gothic chapels. This crypt also features the Saint Forts well (Gallo-Roman origins), said to contain miraculous waters. 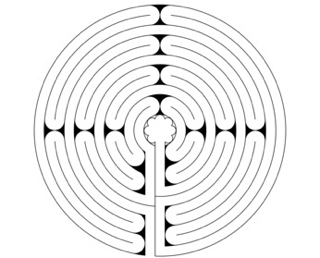 The labyrinth of the Chartres Cathedral

Dating back to the early 13th century, the maze is located on the ground in the center of the nave, and has remained in an exceptional state of preservation. Featuring alternating stone slabs and strips of black marble, it is considered by the faithful to be a symbolic pilgrimage to Jerusalem. The holy city is marked by the pink rosette in the center. Though it is usually covered by chairs, it is cleared on Fridays from March through October from 10 a.m. to 5 p.m.

The Chartres Cathedral was always a major pilgrimage site, and this enthusiasm is mostly due to the religious relic, the veil of the Virgin, housed in the Chapelle Saint Cœur de Marie (Sacred Heart of Mary Chapel). The Empress Irene of Byzantium gave it to Charlemagne; Charles the Bald, his grandson, would in turn donate it to the church of Chartres around 876. It is said that Mary wore this piece of clothing on the day of the birth of Christ. It is for this reason that pilgrims ventured (and still come today) to pray for the arrival of God on earth, the Incarnation.

Today the pilgrimage of the Pentecost brings 10,000 people to the city every year, making it the largest pilgrimage on foot in Europe. Chartres is also an important stopover for pilgrims traveling along the Pilgrimage route of Saint-Jacques de Compostela, coming from the north of Europe and taking the road from Paris to Tours.