Around this square stands the other monuments listed as World Heritage sites: the Hôtel des Monnaies (the Mint) that faces the Palace, the Notre Dame des Doms Cathedral and the Petit Palais complete this palatial perspective. 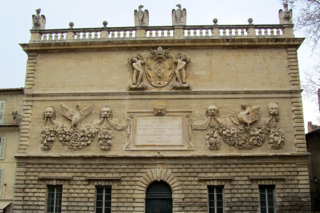 Dating back to 1619, its richly decorated façade contrasts with the Papal Palace. The building takes its name from the mint workshop it once housed. It then became barracks until 1840 and a municipal services bureau until 1860. It now houses the Conservatory of Music.

The current building was erected in the 12th century on the site of a basilica dating from 1037. This cathedral is an outstanding example of the influence of Roman art on the Provincial Romanesque style. There is also an ancient architectural influence in the construction style of the porch. Though it was remarkably well preserved, the building was remodeled many times over the centuries. Murals and paintings decorate the interior. The cathedral also features the funeral chapel of Pope Benedict XII. 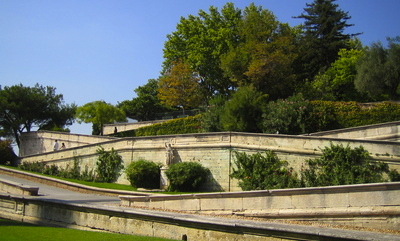 The Jardin des Doms is a lovely garden for taking a break while visiting the historic center. The garden of the Rocher des Doms offers a magnificent panorama of the old city on the Rhone and surrounding countryside, all the way to Mont Ventoux.

A natural refuge overlooking the Rhone, it was the birthplace of the city in Neolithic times. In the 18th century it became a popular place for walking for its view and the quality of its air. The hygienist in vogue at the time recommended the creation of English parks to fight against epidemics by creating more airflow.

In the 19th century, it was transformed into a real park (trees were planted, ponds and statues installed ...). The little ones can enjoy the playground, the sundial (visitors use their shadow to tell time), pedal horses, ducks and swans. Shaded picnic tables are available on the site, as well as a refreshment bar serving snacks.

At over 4 kilometers long, the defensive walls that still surround the old city today date back to the 14th century. Fifteen years of work were required to build them, thereby pushing back the potential attacks by assailants such as the Grandes Compagnies (criminal groups of mercenary pillagers).
You can access some of these walls by the entrance of the Pont d'Avignon and go up to the Jardins des Doms. The view on the city and the Rhone is amazing. Free access.