The Grand Trianon of Versailles

It would be difficult not to fall under the spell of this beautiful complex built in pink marble and in a style influenced by Italian architecture.

The Grand Trianon is probably the most refined and elegant construction of the Versailles estate. Surrounded by richly flowered French gardens, it exudes an atmosphere full of softness and intimacy, and invites visitors to linger in admiration.

History of the Grand Trianon

The Grand Trianon was created by Jules Hardouin-Mansart in 1687. It was a haven where the rulers could relax and entertain themselves and their guests away from the bustling palace, teeming with thousands of people, and was particularly appreciated Marie Leszczinska, wife of Louis XV. More recently, General de Gaulle took an interest in it, and championed its renovation in the 1960s, as well as the construction of a Presidential residence in the north wing, called "Trianon-sous-Bois.” The Grand Trianon also housed foreign heads of state on official visits (Richard Nixon, President of the United States in 1969 and Queen Elizabeth II of England in 1972).

From the construction of the building, Louis XIV commissioned almost 160 paintings to decorate the palace. Unfortunately, the majority of these works were dispersed during the Revolution. The interior decoration and furniture that can be seen today date back to First Empire under Napoleon I. The themes are mainly focused on the nature, gardens, flowers and vegetation that surround the palace. 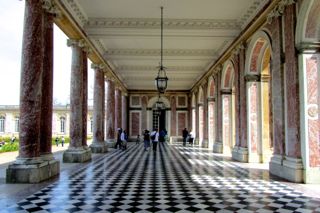 This courtyard at the center of the building is divided into two wings connected by a gallery of columns in green and red marble (the peristyle). To the right is the North building, to the left the South building. 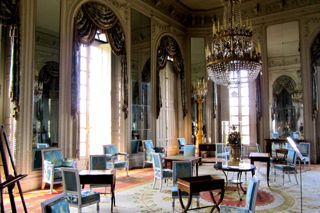 Salon des Glaces
The Room of Mirrors : It was the Board Room under Louis XIV.

Salon de la Chapelle
The Chapel Room : Located in the left wing, it is decorated with paintings of Louis XV and Marie Leckzinska. 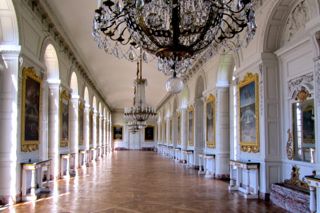 Salon rond
The Round Room : Located in the right wing, it had several functions. It was a chapel under Louis XVI, a guardroom under Napoleon and finally the usher’s room under Louis Philippe. The beautiful décor dates back to Louis XIV.

Salon de musique
The Music Room : Louis XIV used this salon for dinner music, Napoleon used it as an officers’ lounge and Louis-Philippe used it as a billiard room. Beautiful woodwork.

Galerie des Cotelle
The Cotelle Gallery : This luxurious gallery owes its name to the artist who created the paintings of groves that adorn the gallery.

The small apartment of the Emperor, located in the north wing, is composed of a suite of five rooms (hall, room, private room, living room and bathroom). The décor dates back to Louis XV and was completed by Napoleon I.

Added to the north wing in the early 18th century to remedy a lack of space, Trianon-sous-Bois is especially marked by the 20th century and General de Gaulle, who breathed some life back into it by welcoming guests of the Republic. Trianon-sous-Bois became the property of the Palace of Versailles in 2009. 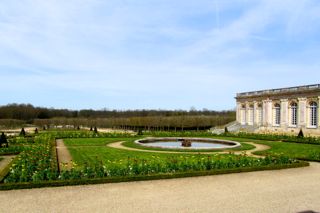 From their outset, the Grand Trianon gardens were rich in parterres and pools. Nearly 100,000 plants made up the reserves of the palace, and were presented periodically in the gardens for the king’s pleasure. It was said that the scent from flowers was so strong that it was sometimes unbearable to walk around the Grand Trianon without falling ill.
The Grand Trianon was equipped with French gardens under the influence of Madame de Pompadour, who persuaded Louis XV of their beauty. An 8-kilometer path of symmetrical and geometric parterres, they are bounded by walls along 2 kilometers. Unlike the palace gardens, they do not have fountains, with the exception of the Buffet Fountain, and are simply decorated with sculptures and ponds. Hardest hit by the storm of 1999, these gardens have been in restoration since 2003.